A BIT of a scoop in May, I did up a story for the New Journal about how City Hall is considering opening up the famous Crime Museum at Scotland Yard – the collection of artefacts from real life crime popularly known as the Black Museum which you only get to see by invitation only.

There’s a feature on it here, blathering on about how Orson Welles turned the ‘warehouse of homicide’ into a regular radio play. By all accounts, the Black Museum is a pretty scary collection of murder weapons and is often said to be an advisory. For example, the pots and pans that serial killer Dennis Nilsen concealed his victim’s bodies are there.

The Times seized on the idea of it being open to the public with this article a few days later (so excited, they even devoted one of their leaders to the story) and the  Evening Standard, who really should have had the story before everyone else, trundled along a little bit later with this.

The belated and sudden interest says something about how well meetings at City Hall are actually being scrutinised, as the information had been available in meeting minutes pasted up online for all to see for several weeks before we used them. London Mayor Boris Johnson might be saying anything in those meetings and, if nobody is at least looking at the minutes, the people who voted him in wouldn’t know. He could have said we were all entitled to free Toffee Crisps and we wouldn’t have known where to claim them.

Meanwhile, the whole ‘Open up the Black Museum’ story caused a minor stir with City Hall’s press peeps. Emails sent to me later under the Freedom of  Information Act show communications staff were a little alarmed at where it was all going. It has pointed out more than once that relatives of people affected by the crimes documented by the Black Museum might have a wish for the doors to stay closed. As one email, see below, said: “There is a high risk of political controversy”. Had we caused a panic? Maybe not, the warning is tempered with the line ‘It’s only Brian Coleman quoted…’ 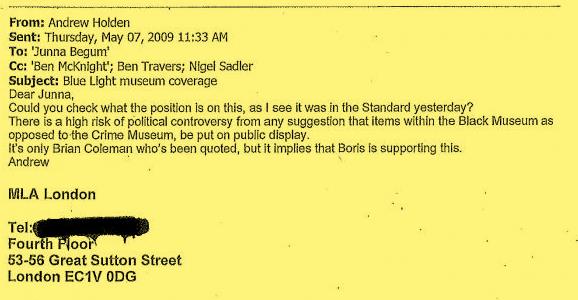