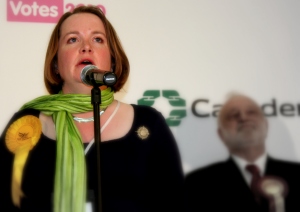 THE Lib Dem parliamentary campaign in Holborn and St Pancras feels like the rustic fairytale of the Emperor’s New Clothes, especially those frenetic final days when canvassers appeared to trick everybody, including themselves, into thinking they were within sight of victory. Just like the old fable, we were told that only the foolish couldn’t see how well candidate Jo Shaw was doing.

The truth, the election on Thursday exposed, was that we couldn’t see it because Shaw clearly wasn’t doing as well as they had bragged and was actually 10,000 votes adrift from winning. That’s a pretty hefty deficit. The excited Lib Dem briefings that got louder and louder as election day approached turned out to be simply puff.

Dobbo’s victory there leaves the Lib Dems in a spot they can’t have been expecting to consider. This was meant to be a ‘moving forward’ seat where Shaw would whittle down his lead so that the constituency could be realistically targeted at the next election.

So, the main objective has fundamentally failed.

How can the Lib Dems now treat Holborn and St Pancras  as a top target at the next General Election, even if one is held later this year? What reason has central office strategists got to send stretched resources there.

The seat – and Camden as a whole – must encapsulate the frustration that the Lib Dems across the country will have felt on Friday. So much hope, then crashing deflation.

Dobson is always going to be a stubborn nut to crack for the Lib Dems. He’s won eight times. But what has been interesting is the contrasting fortunes between this Lib Dem campaign and the one waged last time by Jill Fraser, a popular candidate from the chip shop in Queen’s Crescent. She might have thought in 2005 she had finally set the foundations for an overthrow when she got within 5,000 votes. But although she was praised throughout the group for the giant swing in her favour, Fraser was overlooked for a second shot at Dobson. He’ll be hard to chase down now.