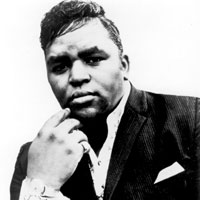 IT would have left an ambition unfulfilled not to have seen Solomon Burke in concert live. I took my chance two years ago, when he was 68 and pushed onto stage in a wheelchair. His frightening girth, his rhino hips were catching up on him but time had not robbed him of one of soul music’s authentic, rootsy voices. It is sad news indeed to learn of his death this weekend.

As engaging as that night at the Barbican was, you couldn’t help wish it was possible to timewarp for a couple of hours, just a quick quantum leap through the decades see him in full gusto in the 1950s and 1960s. In his prime, he must have been a singing Gatling gun at his live gigs. Yet as the self-crowned King of Rock ‘n’ Soul, Burke was never given the credit he deserved for his part in soul music’s development. His contribution is rich. If he is not in your record collection already, you could do a lot less sensible things this week than going out and getting acquainted with an SB compilation. His work has aged well. It should continue to do so.

Here’s my review from one of Burke’s last London gigs, published in the Camden New Journal in June 2008:

WHEN Solomon Burke is literally wheeled on the stage by his entourage and helped into his throne, it takes a few moments to work out whether this 30-stone man really should be cloaked in a gold suit and embarking on an energetic soul revue at 68.

But with good old let’s-do-the-show-right-here showmanship, he tells us he has to keep going for the good of soul music and all his legendary friends who are no longer with us.

While support act Breakestra, with their hour long, non-stop mix of bass and brassy horns are doing their best to stick to soul and funk’s original recipe, the real treat is to see Burke holding court at the Barbican, even if you fear for his health with every lunge into the audience and toss of a rose into the front rows.

The big booming rasp which made his rhythm and blues stand the test of time is still there. Deep in that huge wardrobe of a chest, his lungs do not desert him as he revives hits like Down In The Valley and Cry To Me with a devastating power which younger contemporaries could never match.

Too often, Burke’s contribution has been overlooked. He has sold a lot of records over the decades and produced important soul music 45s in the 1960s, but he never became a household name in the same way that Wilson Pickett or Otis Redding did.

His renaissance in recent years has reversed that to some effect – he was a big draw at Glastonbury two weeks ago and he is not just relying on old requests to get by. His recent bluesier, reflective albums have gone down a storm as well.

And he still knows how to put on a good show, assembling a tight band that is just as at home thrashing out the crowd-pleasers like Everybody Needs Somebody To Love – the hit confiscated with little acknowledgement by The Blues Brothers – as it is backing schmaltzy covers.

Around the horn section and the strings, women from the stalls queued up to kiss his puffed cheeks. They don’t make shows like this any more and it made you wish to have been there when he first mounted a stage to sing Just Out Of Reach.

It ends with a rousing version of When The Saints Come Marching In – sung more by Candy Burke (one of his 21 children) and Sophia (one of 89 grandchildren, who is older than Candy).

By this time the lights are down and in the darkness you can just about see Burke back in the wheelchair and covered in towels.

Let’s hope those last glimpses of a true great were not the last London sees of him.