WITH a general election, a hospital to help save and a wave of anti-cuts protests, 2010 has been busier than ever in the Camden New Journal newsroom. There were exclusive splashes about flip-flops being handed out to drunks in Camden Town by police and a fireman commuting from Blackpool to his shift in Kentish Town but here’s my top five front pages of the year.

1. Victory For The People. There were some readers, albeit only for a short time, that sneered at this front page, insisting that then Health Secretary Andy Burnham’s pledge to ensure the Whittington Hospital’s A&E would not be closed down was paper thin. In truth, Burnham’s message to the New Journal meant every political party was now on board and committed to keeping it open. It was a crucial tie: Burnham, Andrew Lansley and Norman Lamb had all made public promises, trapped on record. The declaration of ‘victory for the people’ was to prove more than justified. After months of reporting on – and joining – the campaign to keep the service alive, the call from Mr Burnham’s office on the Wednesday evening before print sent a buzz through the newsroom. It was a fitting end to a memorable campaign – and left politicians in no doubt that if they try to tinker with the hospital in Highgate again, they pretty much have the whole of north London to contend with. The Defend the Whittington Hospital Coalition has a lot to feel proud about.

2. Glenda Wins By 42 Votes. A special Friday edition turned around in a matter of hours capturing the moment Glenda Jackson pulled off a great impersonation for Harry Houdini. She held her place in Parliament by just 42 votes at May’s general election. It was seats like Hampstead and Kilburn that the Conservatives needed to win in order to run a Lib Dem-free government – and look how close they came. There probably wasn’t a more fascinating constituency to report on, as not only did Glenda face a tough battle with Chris Philp but Lib Dem candidate Ed Fordham as well. She was a 6/1 outsider to win at one stage in this three-way fight to the end. The atmosphere for the count at Haverstock School was electric. Even some of the most upbeat Labour supporters, on a night when their party lost power nationally, seemed surprised. Hours after her victory speech, this front page and a special edition was circulated across Camden – including the count for the council elections where Labour also emerged triumphant.

3. Now Will You Listen? The introduction says it all.. We marched in unprecedented numbers, filling the puddle-drenched road to the Whittington Hospital in unprecedented numbers. That demonstration in defence of the Accident and Emergency department was spine-tingling. Every reporter in the office was there that Saturday afternoon, standing shoulder to shoulder with 5,000 people from across north London. The march had a major impact on saving services at the Whittington. It will live long in the memory, and not just for Islington Tribune reporter Peter Gruner’s stirring oratory from a double-decker battlebus. 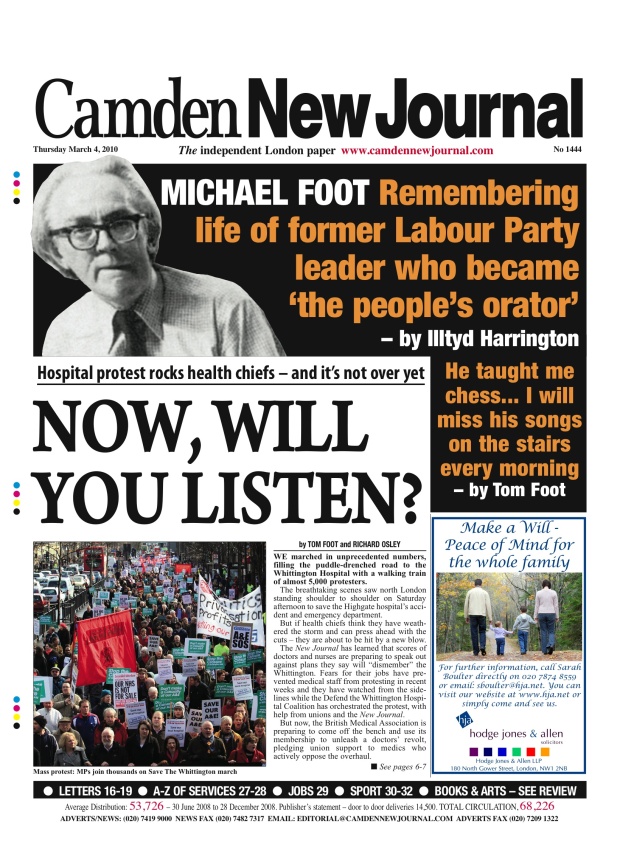 4. Little Rio’s Recovery Is A ‘Miracle’. This one, I know, touched a large number of readers. Rio Packer made an astonishing recovery at University College Hospital from brain damage in the first months of his life. Part of his therapy was listening to Mozart. Experts were amazed at his progress. No wonder people used the word ‘miracle’.

5. No Rest In Fees Fight. The advantage of a late deadline meant we were up all night with the student protesters camped inside Camden School for Girls earlier this month. Our final check was at about 2am. This protest at rising univeristy fees and the proposed withdrawl of the education  maintenance allowance (EMA) drew a new line in the sand. The riots that followed the next day may have stolen headlines and led to inquests, but the teenagers in Sandal Road showed the protest wasn’t all about smashing up government offices.

2 Comments on Front pages of the year