More words from me on the Olympic ticket farce, which you already knew was a farce, as printed in today’s New Journal: 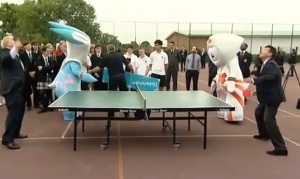 SO, how many of you answered the last call for Seb’s synchronised swimming scraps, apparently the final available crumbs of the Olympic ticket pie?

I say apparently because every time all events are seemingly sold out another batch of left-overs seems to be magicked up from somewhere. Locog, the organising committee, almost now seem like they are playing a cruel treasure hunt game, with you lot out there – yes, you, reading this – playing the role of their puppets.

You’re being strung along in the desperate idea that you might be able to find some secret cache of diving or dressage tickets hidden by Seb in the hollowed trunk of a mystical internet tree. When he says log on, you log on – and then you get another slap in the face and a kerplunking email saying: Not here, try again next time.

The tickets thing is tiresome and people who excitedly paid extra taxes in London because they were inspired by the idea of the Olympics are getting bored and upset.

The best way to soothe this disappointment for people, I find, is to ask them who from their local area should hold the Olympic torch for two seconds. Watch out, Camden Council, some would rather nominate someone to snuff it out right now.

When the tickets first went up for sale Seb clearly said on the TV – he was probably at a table tennis photo-shoot with Boris Johnson at the time – that people should look at their budgets and look at what they wanted to see and then apply.

Yet in the first round of ticket allocations you essentially had to pledge thousands of pounds to stand a realistic chance in the lottery, a system clearly aiding the wealthy and discriminating against low-income families. It doesn’t seem there’s much Olympic spirit in that.

The response to the aggrieved is that demand was always far greater than supply and, of course, the whole world can’t fit into the swimdome (or whatever these new venues are called). But this argument suggests that every request was from a unique bidder when in reality lots of bids from the same person were successful.

Some people, with the means to bid high, bagged six or seven events, while if you’re budget was £100 or £200, you were left with none. There must have been a fairer way to get more people to the games?

Yet, as long as the demand is high, Locog can keep playing with their puppets and hint at more ticket releases to apparently sold-out events in the future. Organisers must know there is an innate feeling among the majority that once the London 2012 games have been and gone, you need something to tell Vera, Chuck and Dave about being there. “Oh yes, grandchild, I was there, I saw Venezuela beat Poland in a sport I didn’t quite understand. No, grandchild, Seb wasn’t there. He was at the 100 metres final.”