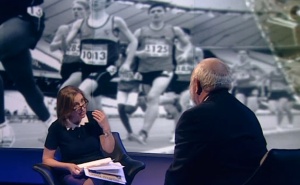 EARLY yesterday evening, Carlos Tevez was roundly boooooed after he held up a sketch of a gravestone during Manchester City’s championship parade which read ‘RIP Fergie‘. Everybody (Twitter) said no jokes about people dying, thank you, and Manchester City had to put out an apology on Tevez’s behalf.

Later, Holborn and St Panc’s MP Frank Dobson was on the television – you can’t keep him off the Beeb at the moment –and was asked on Newsnight about the possibility of the Olympics greaseballs enjoying hospitality in London this summer might be getting priority treatment at places like University College London Hospital. He’s right when he says there is a ridiculous ‘buffed up, self important’ entourage on their way. We all know it.

Kirsty Wark could not help but pick up on Frank using FIFA’s odious toad (as I gather people say these days) Sepp Blatter as an example of somebody who might enjoy special treatment. Dobbo replied: “There’s nothing poor about Sepp Blatter, most football fans in this country would think he should be offered euthanasia at University College Hospital.”

Everybody fell about laughing. And then it was time for bed.

…you can watch it all again HERE.