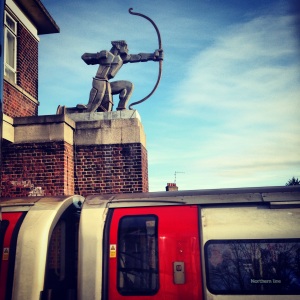 YOU thought pizza makers Domino’s just made pizzas, right? Wrong! They are local historians too.

Just so we all know they are in tune with the local community – that they care – each branch has a potted history of its neighbourhood on its website. Take East Finchley, of which Domino’s historians tell us not only that Jerry Springer was born in the underground station during the war (disputed: wasn’t that Highgate?), but also all about the famous statue of an archer standing on top of the tube stop.

It marks the last bit of track before the Northern Line goes underground for miles and miles. Domino’s history department tell us: “The archer’s arrow rested at Morden station further down the line, after having presumable [sic] been shot. Unfortunately, the statue proved so popular that someone stole the original arrow.” The story of the arrow theft is repeated many times across the internet, including East Finchley’s Wikipedia entry.

But are Domino’s and the other local historians right? If you switch to Morden’s Wikipedia entry, the fountain of all shared knowledge tells us: “It has been said that there was originally an arrow here to complement Eric Aumonier’s Archer statue at East Finchley station, and that this was stolen shortly after the station opened; however, East Finchley was not served by the Underground until 1939[5] and the statue was not erected until 1940.”

4 Comments on A slice of history: What happened to the East Finchley archer’s arrow?