BRAVE or foolhardy, a handful of Camden councillors stepped into a lion’s den last night when they appeared at a packed meeting of welfare cut campaigners. The invitation had gone to all councillors. Less than a fifth turned up to listen to what became a harrowing recital of hardship. Those who did appear and left feeling scarred will at least always be able to say they did not shy way from facing the sheer public anger out there. That’s surely worth something.

It was nevertheless an uncomfortable Valentine’s Night for our elected members. Camden’s residents and campaign groups can bind together to become a challenging lobby not afraid to spell out what they want in simple terms. Past community campaigns to save everything from libraries and hospitals to council homes have always been strong here. Their strength have been badly underestimated many times before. 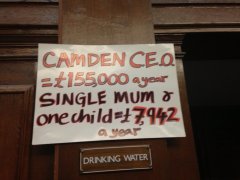 Repeatedly, councillors were asked last night to resign from their positions and have new elections on the issue of public spending cuts and benefit caps. The idea here is that if councillors everywhere refused to implement government cuts, then they would be impossible to enforce. If it happened at every local authority in the country, the coalition government – the theory goes – would be hamstrung.

Councillors in Camden, the Labour ones who have the final say on policy, say this might sound like a striking form of resistance but it would fail on the grounds that control of council affairs and budgets would instantly be swallowed up by the government and civil servants, removing a line of defence against cuts – however thin it is – fostered at the Town Hall.

That doesn’t wash with the welfare campaigners, who accused the council’s decision makers as lacking back bone. They say the cuts hurt so much already that no councillor should want to be associated with them. The drastic move of placing families affected by the housing benefit cut as far away as Birmingham was mentioned several times.

It got fractious, an indication of the frustration that is out there. It was aggressive too, as people who clearly would never countenance voting for the Conservatives in the room warned that they would not be forced into voting Labour either. When it was announced that the councillors would explain their position at the end of the meeting, somebody in the back row muttered: “Right. Make sure you see the whites of their eyes before you shoot.” Another screamed: ‘Shout the Labour Party’.

Do not think this meant there weren’t any considered, rational viewpoints during the evening. There were. In fact the tragic stories recounted here were what created such a melting pot of anger. In the later stages of the meeting, there was ferocious heckling as councillors passed up each invitation to refuse to vote for a budget of cuts. They were told simply that they were ‘with us or against us’.

Theo Blackwell was drowned out in the noise. Sally Gimson suffered a similar fate.

By the time, Conservative councillor Jonny Bucknell, the only Tory there, tried to explain the welfare bill from his party’s point of view, he was speaking to a backdrop of somebody shouting: “Shut up, you’re a bullshitter.” See the video below. You got the impression similar scenes of public anger will follow.

12 Comments on ‘With us or against us’