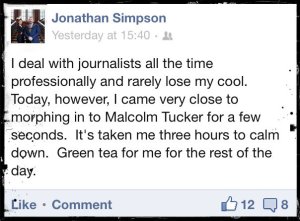 CAMDEN is set to re-appoint the original rock ‘n’ roll Mayor Jonathan Simpson as its first citizen tonight. He championed live music during his first stint a couple of years ago and the Labour group, despite some resistance from the Lib Dems, are supporting his nomination for another turn. Colleagues are impressed with what he has planned in terms of fund-raising over the next 12 months.

But before tonight’s mayor-making event, normally a convivial affair where political rivalries are suspended, extra supplies of green tea are on order. One of his supporters sends me a look at one Jonathan’s updates on Facebook yesterday which suggest, as he prepares for his big night at the Town Hall, he was “very close to morphing in to Malcolm Tucker” after what sounds like an unexpectedly spiky call from a reporter. Who knows which journalist? Wazzznt me.