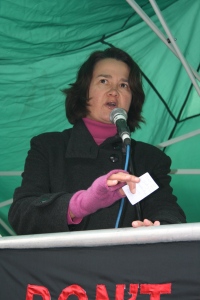 ISLINGTON Council leader Catherine West remains the hot favourite to be the Labour candidate taking on Lynne Featherstone in Hornsey and Wood Green at the next General Election, although her supporters are striking a cautious note. She was officially shortlisted for the role on Saturday. Like Hampstead and Kilburn, it’s an all women shortlist. Her rivals for the role were confirmed on as Mandy Richards and Kirsten Hearn.

Sources on that side of the borough fence say Catherine needs to be on guard from Mandy’s “passionate” speeches and the challenge from Kirsten, who was said this weekend to have proved to be “very impressive” during shortlisting interviews. The winner has a key task for Labour. Winning in places like Hornsey and Wood Green against a Lib Dem MP with experience of the coalition front bench has to be part of their overall General Election assault. The battleground may become so critical in fact, it will be interesting to see whether it sucks in Lib Dem resources from Islington and Camden.

A decision over whether it will be Catherine, Mandy or Kirsten is due on June 23.