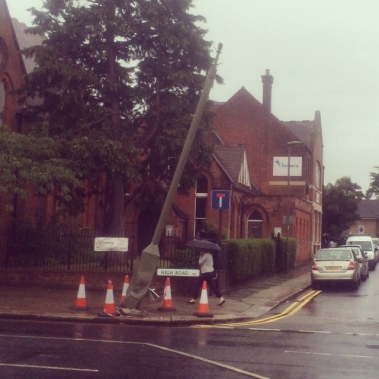 THIS is parochial, and niggly, but maybe it goes some way to illustrating how long it takes for the authorities, whoever they may be, to get anything done, even when things look precariously urgent. Take a walk up to East Finchley and you’ll find a major clue as to what happened nearly three weeks ago on the High Street. A lamp-post leans to one side, marking the spot where a car hurtled off the road.

It might be an optical trick, but I swear it teeters closer to kerplunk every time I walk past. Judge for yourself in the picture. The less worrisome are photographing themselves on the other side of the road, pretending to be pushing it back up with their palms. Like they’re tourists in Pisa.

Last week, five cones appeared around its base to stop us stumbling into it. I tweeted a picture of it, mainly because tweeting is usually more effective that contacting the local council directly. When fly-tippers dumped bags of mess and a broken toilet rim on a street corner, I tried to do the good neighbourly thing of telling Barnet Council and got lost on the website.

And sure enough, a response did come quickly to the lamp-post picture.

The local Labour councilllor Arjun Mittra responded to my tweet, promptly to say: ‘Been reported’. Now Arjun seems like an affable enough guy. I don’t know him, but I’ve seen him dutifully donning a high-vis vest to help marshall the East Finchley Festival crowds at Cherry Tree woods each year. On the subject of the EF Festival by the way, my favourite/least favourite act this year was the stompy rapper guy who came on stage like it was Times Square and shouted: Anybody here from London? Yes, all of us, we all mumbled back.

But back to Arjun and the lamp-post. If, after nearly three weeks, the lamp-post was to fall to earth and – stars above, let this not happen – injure a passer-by or crash through or in front of a passing car, it will no doubt be of blessed reassurance to the bruised soul in their Whittington Hospital bed that it had at least ‘been reported’ beforehand.

I’m no engineer, but to a layman it looks like ‘been reported’ needs to be changed to ‘been fixed’.

Because it’s a thing, isn’t it? That a lamp-post can hang over a busy road for three weeks with not much being done apart from the introduction of a circle of cones.

It would probably be the same in any neighbourhood in London, and that in itself is why every local paper in the country is full of people worrying about things that could kill someone here, there, everywhere, every week.

What ‘been reported’ probably needs to be in practice – and maybe Arjun has done this already, good soul as he seems to be – is a harrying ‘been reported x 10’ with pressure applied on a daily basis until it is repaired.

From afar, you wonder whether they have even got past the first step bit where they work out whether Barnet Council or TfL are responsible yet.