CAMDEN’S councillors had the night off last night. They were meant to be at the Town Hall for the near-monthly all member full council meeting. but agreed to ditch it for a few weeks – I’ve been remind several times it was postponed not cancelled – so that they could ‘march’ to Trafalgar Square for the Let’s Stay Together rally ahead of the Scottish independence referendum on Thursday. They didn’t all go: Douglas Beattie, a Labour councillor in Kilburn who is for independence, stayed behind tweeting his disgust, while Sian Berry, the lone Green councillor whose party wants a ‘yes’ vote, questioned why local debate in Camden had been sacked off for the evening by tweeting from a ‘lonely’ council chamber.

It was a curious evening. This merry band of Labour and Tory councillors, allies for an evening, would probably have got to Nelson’s Column quicker by tube or bus, but that’s not marching for the Union. So off they tootled along the pavement, not enough of them to stop the traffic, chatting convivially instead of blasting Braveheart shrieks through a megaphone. It was all very polite on a pleasant late summer’s evening. It felt a bit like schoolchildren finding out they were having lessons on the grass. 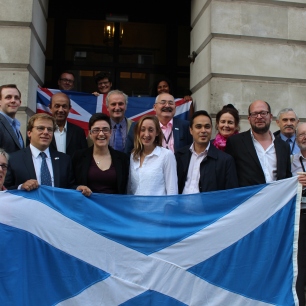 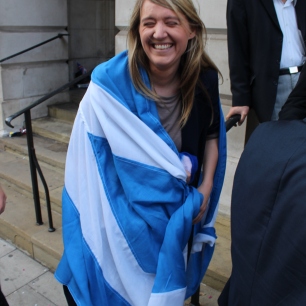 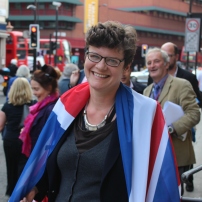 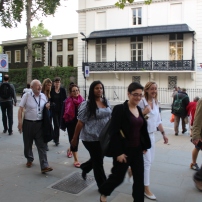 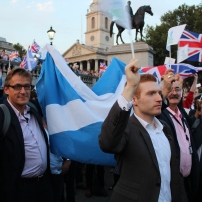 Yet, when our council meeting bunkers/marching unionist heroes [delete as appropriate] reached Trafalgar Square, you couldn’t help feeling whether at least one or two of them were wondering whether it had all been worth the fuss. Not because they are not clear on which way they think Scotland should vote, but because the rally itself was, to be honest, a little limper than expected. There was a lack of power in the speeches, the speakers groped around in search of a bit of soul, a bit of wit, but could do little better than Sir Bob Geldof doing his I’m really, really angry routine by dropping into some shock swearheli. Eddie Izzard, for his part, couldn’t speak without mentioning his marathons.

And it was certainly not the mass history moment the councillors might have thought they were going to. There was a lot of people there, no mistake, but it was not a football crowd crush and this setting has often seen greater numbers flock to a cause around those fountains. You could slip among the people and find your friends with ease, as long as you weren’t desperate for a cameraphone snap of June Sarpong.

As it happened, it was all over at 7pm, the start time of the full council meeting. “What if we had been kettled?,” said one councillor, when I asked why the full council meeting back at the ranch could have just been given a delayed start. There at the Town Hall, officials were officially postponing the meeting. It would have been interesting if the same decision would have been made if there had been something on the agenda with a great local controversy attached, like the Swiss Cottage sky-scraper. 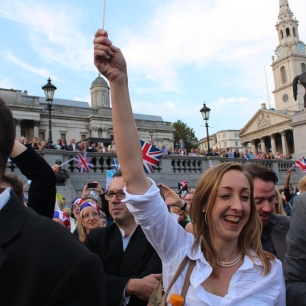 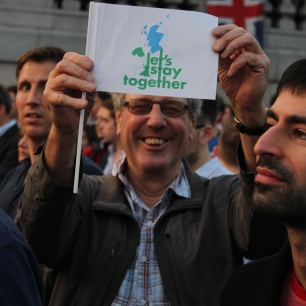 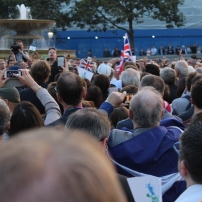 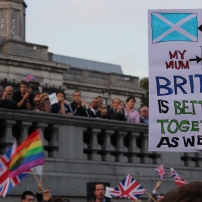 Somewhere up there is Raj Chada 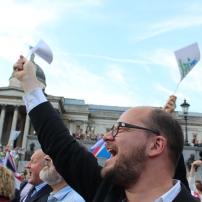 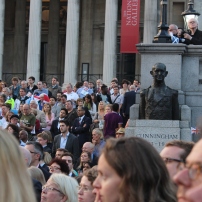 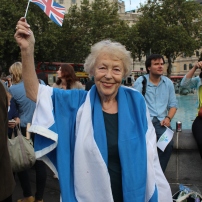 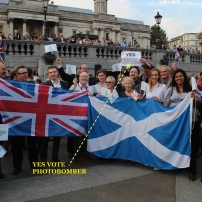 Of course, the councillors did not know that the speeches were going to be dry, whereas they did know how the increasingly ineffective full council meeting was likely to pan out. Shorn of debate, it has become more of a forum for Labour back-patting due, and you can’t blame Labour for winning as many seats as possible at an election, to the increased majority on the ruling side. With that in mind, you can see why many might have been eager to swap one for the other, once the opportunity arose. Even some Labour councillors have worried recently about the structure of the full council meeting, a session which has. at the very least lost its connection, with Camden’s public.

Lonely in the chamber trying to get a seconder for 'This Council would make Camden part of an independent Scotland' pic.twitter.com/TDBNYIElQJ

The individual desire among councillors to be in Trafalgar Square felt like a product of helplessness, that this little stand could be the only way that they, here in London and without a vote, could play any role at all in what happens on Thursday.

It’s not quite clear how many have actually felt so strongly about the issue that they have travelled to Scotland with their parties at the weekends to speak to the voters themselves. But some of them do seem in a tizz; their fears stoked by narrowing opinion polls and a media which sells more news on a contest which looks tight. The old hound Rupert Murdoch, for example, has played on these meltdown fears perfectly with a bit of tweety mischief following the first poll to suggest ‘yes’ could be leading, a poll printed in one of his own newspapers.

We will see what happens. My guess is the undecideds are more likely to actually be ‘no’, and that will be the end result, perhaps more comfortably than has been suggested in recent days. But if it does go wrong for those folk who gathered in Trafalgar Square last night, at least Camden councillors, who waved their flags when the time came, can say they did their bit.

If the Union goes down, nobody can blame hearty old Camden. They postponed a meeting.