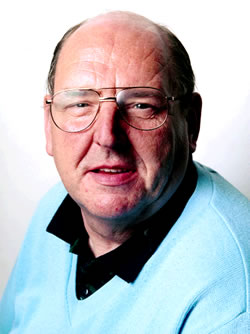 CHARLIE  Hedges was a decent guy; an old school councillor the like of which you don’t really see knocking about the council any more. He proved that, during his time at the Town Hall at least, you didn’t have to go to university or crave to be an MP or network yourself to a debasing level every autumn at your party’s conference, to play an important part on the council. News of his death – he passed away on Saturday – is, for all the scraps that were had over the proposed part-privatisation of Camden’s council housing a decade ago, saddening, A straight-talking, HGV-driving Gooner, he was a link back to a council of different backgrounds, albeit one yet to benefit from diversity of race and gender.

He always called back when we phoned and never dodged a question, even if he probably knew how some of his answers would play in the press. He had been a lorry drivers union rep who got involved with his tenants association. He enjoyed making a difference to his local patch and turned this service into becoming a Labour councillor in Kilburn for 16 years. He might of gone on for longer had his health not begun fading, and he departed in 2006 as a paper candidate in a Liberal Democrat-held ward. A few years later I visited him at his home on the Ainsworth Estate and he was still bubbling with ideas about how the housing department was being run. His former group leader Dame Jane Roberts and friend Phil Turner were still in touch, as they were in the final days too.

Maybe one of his best bits of council work was the 2002 scrutiny panel he chaired into tackling the drug epidemic which was at the time at its most poisonous in Camden Town. He was fair-minded and open leading that investigation, which was both daunting in scale and sensitive due to the way the least charitable viewed the addicted.

Then there was the Almo affair. This was the Blair government’s demand that the council hive off control of Camden’s council homes to an independent company, known as the Arms-Length Management Organisation. Only if it did – and here was the sharp spear of Whitehall blackmail – would Camden qualify for £280 million (in 2004 money) of badly-needed investment in estates and street properties. There was, at least, a referendum on this bribe of a policy, and tenants duly voted emphatically against the switch, preferring to keep a landlord they could vote out should it become necessary. The promise of new kitchens and bathrooms was immediately withdrawn by Tony Blair and John Prescott.

Those were fractious times and Charlie, by now one of the only council tenants serving at the Town Hall, had been an obvious choice to head the department among colleagues who felt awkward at taking the role without having graduated from the tenants movement themselves. It put him on a collision course with many like-minded people and friends, and up against that formidable tenants leader Alan Walter, a council thorn who got the better of most of the local politicians he took on. Charlie’s pragmatism was rooted in a honestly-held belief that the most important thing was that tenants had the best living conditions they could, and the politicised argument about perceived privatisation was of secondary concern.

In later years, he would remark that there were still complaints about the conditions in many council properties that might have been resolved if Camden had got that money, and the only way to get that money, in his mind, had only ever been to choose an Almo.

He didn’t hold a grudge, though. Having lost the vote (and appeared on the front of the CNJ in a funny-at-the-time Laurel and Hardy mock-up), he was one of the first to sign a petition organised by the New Journal demanding direct government investment and for the money that had been set aside for Camden to be delivered any way. There was no outward anger. In between meetings, he joked about Arsenal, where he had been a season ticket holder a long time ago.

If you want a tiny measure of how the council has changed since Charlie’s time, you can do worse than closing your eyes and trying to remember his broad, rolling voice. I can hear it now. It’s almost Cockney, a few dropped aitches, the lad helping out in his father’s butcher’ shop in King’s Cross still there. There are more women on the council these days, more BME councillors, but not many now who really speak like Charlie, that straight-talking, lorry-driving Gooner.

May the big man rest in peace.

3 Comments on So long Charlie, the lorry-driving councillor