CLARIFICATION: At post, 20.22, I wrote Flick Rea’s son had just completed a ‘mini-marathon’ when she hurt herself running to congratulate him. That was a disservice. It was a greater achievement, a half-marathon not a mini-marathon.

22.01: CLL gets a final squeak in before the vote: ‘It’s a shame that Glenda Jackson is prepared to come out against this and you are not.’ Motion is passed, however, due to Labour majority. Angela Pober, another parliamentary selection hopeful in Holborn and St Pancras, is the notable abstention on the Labour benches.

21.55: There’s a Labour amendment, surprise, surprise, deletes all of that and instead calls for a ‘national reform of property taxes’. Five minutes left to argue this out. GO!

21.52: And so we reach the mansion tax motion from the Tories, in which they demand the Labour Council lobbies against it. Eight minutes to discuss it. GO!

21.48: Next motion is a Green-Lib Dem tag team effort, calls for an emergency fund for voluntary groups – say, the ones running some of Camden’s libraries – in times of trouble. That’s all passed too.

21.38: Motion passed here in the chamber: Camden will now not let new contracts to companies who use construction company black-listing of employees. Companies that have been implicated in the past will be required to prove they no longer use it. 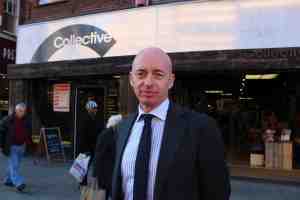 21.28: Today, of course, is the deadline for applications in Labour’s parliamentary selection contest – and it’s 9.30pm now. A bit of news from earlier in case you missed it, the chief executive of Camden Town Unlimited Simon Pitkeathley is among those who has added his name to the runners and riders, explaining his decision on a desire to get the needs of businesses discussed by the party. “We should be able to say community, and business and enterprise, in the same sentence,” he said.

21.19: A ref’s ticking off for Labour’s potty-mouthed backbencher Awale Olad from the Mayor. You can’t say the Tories are ‘heartless bastards’ in the full council chamber. Awale apologises. Takes the yellow card.

I should say at this point ‘potty-mouthed’ has been banned by the New Journal style guide, so running with it here.

21.06: Open session now, Sally Gimson rolling off a whole list of her favourite £4.95-a-pint-of-lager hipster bars in and around her Highgate ward. Ok, serious point, she wants to help save the Dartmouth Arms pub, and the old cliche of the bar being a hub of a community is deservedly well worn for that particular boozer. 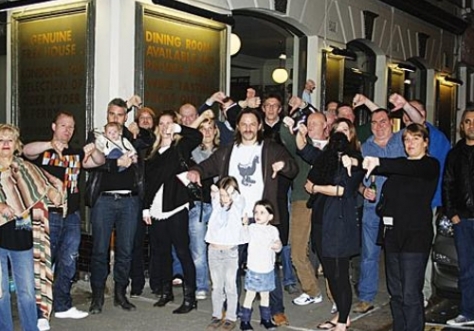 20.59: And there’s the tension that recurs at these meetings. CLL feels she has been stopped from speaking, asking the questions she wants to. Julian now in peace-maker mode, ‘talk to me in the corridor, talk to me personally and I’ll give you as much information as I have’. The background here is that the Tories believe Labour overpromised on the number of new houses that would be built over these four years and CLL and colleagues are trying to pin down, or track, whether the pledge is being fulfilled.

20.55: Bit disappointing. Julian has answered this question for eight minutes and he has not dropped a single quote from a single Dickensian character. No Uriah Heep. No Martin Chuzzlewit. Just one from Winston Churchill.

20.45: Questions to the cabinet, now. Cast your minds back to update at 19.27 when CLL said she appreciated Pat Callaghan answering all the questions directed at her. That was a veiled reference to this moment here, where CLL has asked a question on manifesto promises to the leader – but it has been bumped over to Julian Fulbrook. “It’s interesting to note that when you ask a question of the leader, she doesn’t answer,” CLL says. Sarah comes back and says ‘point of order’ and insists CLL was asking the wrong person. The question then has lots of references to what the council leader promised before the local elections on housing, delivered with a pointed, exaggerated ‘she’ for every reference to her as it is read out.

20.34: Meanwhile, Labour’s Pat Callaghan ups the ante on that onion-chopping anecdote there. She remembers hot dog sellers who chopped their onions on bits of pavement where dogs had urinated and other bits that had been bloodied by drug addicts. No longer peckish.

Pat also warns that ice-cream van traders can be “thuggish”. And all we wanted was a Cornetto.

20.27: Interesting debate about handing fixed penalty notice to rogue hot dog stalls and peanut sellers. Years ago, I did a feature a with the council’s street enforcement team. We went out with them for the day and on our travels we found a guy outside the British Museum chopping onions for his hot dogs on the pavement.

20.22: In Flick Rea news, the sole Liberal Democrat councillor has done well to be here tonight because she is recovering from a leg injury which she sustained during a half marathon. For clarification, she didn’t run the race herself but took a tumble running over to see her son as he crossed the finish line earlier this month.

20.13: Onto a bit about finance with Theo ‘T-Money’ Blackwell. Labour backbencher Richard Olszewski asks whether an exit from the EU would have an effect on the council’s cash, claiming the Tories are sleepwalking towards the exit door. T-Money: “I do think it is extremely worrying, the current debate the European Union. We are talking about the long term future of council finances. The Eurozone with its volatility has already had an impact on our finances. Any continuing uncertainty will actually impact on our long term decisions, and long term stability. I’d like to ask officers to start speculating on that. The residents of Camden need to be informed more about the liabilities that come with certain political decisions.”

20.07: One and half hours in. Feeling peckish. It’s a shame they no longer have that mutton curry stand thing outside. You used to sit down with a korma, something like that, and then have your dinner completely ruined by champion heckler Ellen Luby shouting at you about what a terrible job you were doing. Still think they should have a mini-plaque to her on the fourth seat in the middle section of the public gallery front row upstairs.

19.55: On the protection pubs, Phil has supplied info to the meeting which reveals FIVE bars in Camden are listed as ‘assets of community values’, them being the Golden Lion in Camden Town, the Old White Bear in Hampstead, the Magdala in South End Green, the Admiral Mann off Brecknock Road and the Cock in Somers Town. It means they get a little bit more protection if they are sold or plans are submitted to develop them.

19.48: Background fact of the evening: if you want to know why Phil Jones is always so zen-like, maybe it’s because he’s a regular at Tai Chi sessions in Kentish Town.

19.38:  Regeneration chief Councillor Phil Jones (pictured below), starts off his presentation by delighting in new council homes, new apprenticeships and new cycle lanes… Now he’ll take some questions on all of that. Danny Beales starts off by asking how the council can protect local pubs. Pubs, pubs, pubs are great places to bring communities together, Danny says, a place ♫ where everybody knows your name ♫. NB: he didn’t sing the Cheers theme, but I like his point. 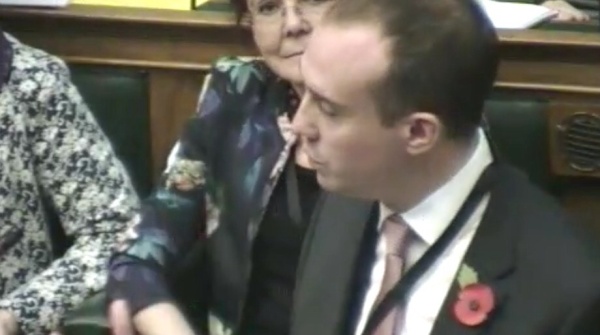 19.32: Outside of the chamber, the living wage deputation of school meals staff are not really happy with the response they have got from tonight’s meeting, mainly on the grounds that 2016 seems a long, long time away when you are being paid so little. There have been some angry words to the press out there.

But you know one thing, that deputation was organised by Unison… who are now officially backing the Town Hall leader Sarah Hayward in that parliamentary selection contest in Holborn and St Pancras.

19.27: Subtle, subtle from Claire-Louise Leyland there. She told Labour cabinet councillor Pat Callaghan that she has a reputation for answering the questions that are put to her. Why the praise? The code here relates to a backstage to-and-fro, where a question about housing that CLL has posted for Sarah Hayward to answer later in the evening has been palmed over to Sarah’s colleague Julian Fulbrook to deal with.

19.24: The American scouts have left us. Couldn’t even stand an hour of this. Poor souls, hope at least they get a badge for this.

@RichardOsley I'M FROM CAMDEN! (But I'm outnumbered in the gallery by non-locals – and I don't think these scouts are from Barnet either)

19.14: My colleague William McLennan checking out his first council meeting tonight. You should all start following him on @williammclennan

19.07: In response, Conservative leader Claire-Louise Leyland is on her feet, celebrating the importance of the full council meeting. She goes over her time – but won’t stop for the Mayor. “We should be working together,” she says, and alludes to a breakdown of trust across the chamber over the negotiations around that missing meeting. 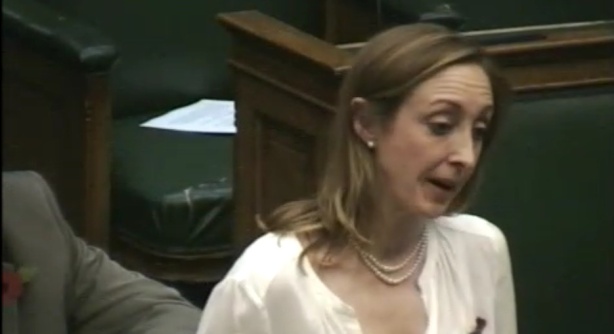 19.03: Parliamentary selection hopeful Sarah Hayward begins her council leader’s speech. She defends the fact that we haven’t had a meeting like this since July and the decision to postpone one in September so councillors could head to the ‘no’ vote demo in Trafalgar Square in the week of the Scottish independence referendum debate. Camden was a ‘small cog in a big machine’ in the independence debate, she says.

18.57: One public deputation tonight. It’s Unison convenor Hugo Pierre (pictured below) calling for the London Living Wage for dinner ladies (and dinner gents, presumably) working in Camden’s school. They are not directly employed by the council and are hired by Caterlink, the company which won the contract by the council. Mr Pierre: “Our members have to work in difficult conditions. It’s hot, physically demanding, exhausting and leaves little time for them looking after their own children when they get back… It is essential that this is implemented for these staff.” 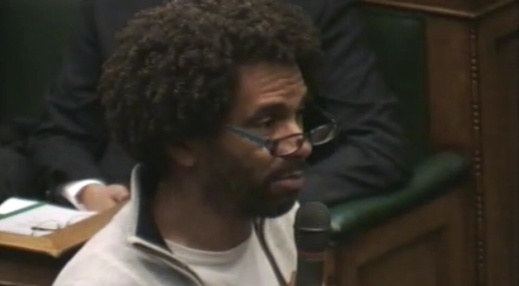 Council leader Sarah Hayward responds saying the council will not re-let the council to a contractor not paying London Living Wage. It’s not expiring until 2016, however.

18.51: The Mayor confirms that hardly anybody in the public gallery is actually from Camden. The scouts are from America, gee whiz, and in the other gallery sits the Mayor of Perugia and a colleague who are watching this with the aim of learning about how local government works around here.

18.49: A minute’s silence for Charlie and Sheila after some lively anecdotes about both of them, clearly admired from all sides..

18.40: All of the recent talk about the public gallery being empty for full council meetings… not so tonight, lots of young lads filling the seats, looks like scouts. Definitely something with badges on sleeves. Good luck to them.

18.32: Camden’s Mayor Lazzaro Pietragnoli kicks of tonight’s full council meeting, the first in ages. Appropriately, tonight’s session begins with tributes to former Labour councillor Charlie Hedges and former Conservative councillor Sheila Gunn, both of whom passed away in recent weeks. Good people who served Camden well during their time at the Town Hall..