22.00: All done for tonight. Strong start to the meeting with the sign of a genuine debate on the London Living Wage. Then we had the budget debate: there was a bit of it’s -your-government’s-fault, no it’s-your-old-government’s-fault, but at least we could see where the differences of opinion on tax and spending lie locally. Next meeting is April 13, so close to the general election – should be spicier.

21.52: Just a few minutes left now, despite a brisk pace, we haven’t got to the motions. Standard.

21.38: Questions to cabinet here, Sally Gimson tells the Tories that 20 percent of hones could be suitable for a fortnightly refuse collection. This issue will keep coming back up in the coming months. Conservative Andrew Mennear plugging away at it. Posted earlier about the refuse debate in the Labour group. There was some distress when it was suggested that ethnic minorities did not know about recycling.

21.34: News from up in Hampstead and Kilburn. Labour were very disappointed with the BBC’s Sunday Politics a few weeks ago for what they felt was a raw deal for candidate Tulip Siddiq. Tonight they feel some scores have been levelled after a double page spread in the Evening Standard tonight on London’s marginal seats. Andrew Neather describes Tulip as having an office buzzing with volunteers, while Tory rival Simon Marcus is labelled as ‘visibly tired’.

21.24: A little break, just enough time for Don Williams to come over to the press bench  say there is no need for a rise in council tax in Camden.

20.59: Public gallery watch: This week, we had Green Party leader and Holborn and St Pancras candidate Natalie Bennett keeping tabs on the first hour. We’ve also had former Lib Dem councillor Janet Grauberg for the budget debate. And still doing the time up there, Hampstead Conservative Oliver Cooper, tipped for big things within his party.

20.54: T-Money accuses the Conservatives of picking parts of the budget they think sound silly and criticising them. No earthquake here, Labour are holding their line with their big majority and will see their budget, and the tax rise, through a recorded vote… if Abdul Quadir says the right thing, at the right time. He almost voted for the Tory amendment by accident there.

20.41: Former Tory leader Andrew Marshall is up making his point about the cost of having a Town Hall cabinet of ten Labour councillors. Wants the council to save money by having less of them. Absolutely no chance of Labour taking that one on. Btw Cllr Marshall3 asked me earlier why we had used a picture in the CNJ of chart-topping singer Sam Obernik instead of Labour councillor Thomas Gardiner on a story about Tesco’s licence in Belsize Park last week… suggesting we are just as bad as any Fleet Street grizzler. Apologies to Councillor Gardiner.

20.29: Greens’ Sian Berry welcomes tax rise – but says Camden could’ve gone even higher while still retaining public support. She says two-thirds support a rise. Greens called for a council tax referendum last year, advocating a rise then. Labour stuck with a freeze and are going for the rise this year.

@Sarah_Hayward Well that would make you the Red Queen, wouldn't it? ;-)

@GioSpinella not if you're Alice!

20.13: In Town Hall sign news, the council was a bit tardy about taking down the ‘Liberal Democrat Group’ nameplate on the little room found at the top of the marble staircase and left a bit. With only one councillor, the party had to give up the cubby hole. It now bears the badge of the ‘Labour Group Leader’s Room’. Surviving councillor Flick Rea asked whether she could have the sign as a souvenir of the glory days. No, no, no, came the response from a council official, it shall be locked in the Judd Street basement just in case it is needed again, should the Lib Dems rise once more.

20.04: Poor T-Money is stuck here when he could be shaking Eric Pickles’ hands and collecting his ‘councillor Oscar’ at an award-ceremony across town. He’s a winner at the LGiU’s councillor awards, winning for his techy, webby, coding, internet superhighway stuff for Camden.

Wow! thanks to @LGiU for Sandy Bruce Lockhart award #CllrAwards would love to be there but at budget-setting at Town Hall.

19.56: T-Money back up. The rental idea is a no-go, he says, because it would cost extra money for Camden to move staff out of the new offices and put them in the Crowndale Centre. He gets cut off before we learn more…

19.52: Tories are introducing their budget response. Finance man Don Williams says it is time for 0.5 percent DECREASE in council tax. He says one way of balancing books would be to rent out the top floor of Camden’s lovely new offices at 5 Pancras Square in King’s Cross.

19.43: Well, it’s been quite a beefy start to the full council meeting, hasn’t it? Good numbers of non-councillor people with us in the chamber for half an hour. A bit of a to-and-fro between the Labour and Tory leaders. And now, T-Money is on his feet, racing through the council’s budget plans. I’m clocking him here at approximately 140 to 150  words per minute. Student reporters will know, you can’t pass a shorthand exam on an NCTJ journalism course unless you can note-take at 100 words per minute. Labour are going to raise council tax, as you will have read in the CNJ. Tories insist this raise can be avoided. 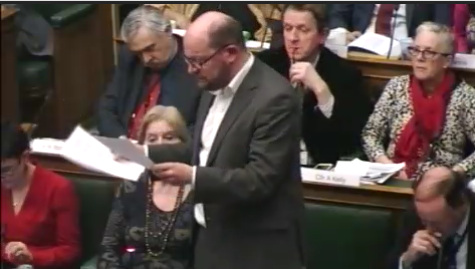 19.38: Conservative leader Claire-Louise Leyland’s turn, wants to talk about the Living Wage deputation: “I feel very upset by what I heard tonight… I think before we start calling on other people to start on other people to start prioritising the London Living Wage, we should start on people working for Camden.” That’s a link to the Labour motion later tonight in which Camden proposes to get involved in the row over money-bloated Premiership football clubs to pay the rate to all of its matchday staff.

19.32: Group leaders’ speeches time. Sarah Hayward. She is absolutely appalled by the HS2 (not just a little disappointed, as the New Journal misquoted her last week as) changing the plans for Euston station again. It tacks on the platforms in a shed – the idea that George Osborne wanted spiked last year.

19.29: Protesters now outside Town Hall. Some shouting ‘not good enough’ to the response by the Labour leadership on this. Quite a din because the school dinner workers have brought pots and pans to bang for a bit of symbolic protesting.

19.26: A deputation about heating replacement works in Highgate Newtown has begun, but in the background councillors can here the Living Wage demonstrators, now outside the chamber, still chanting.

19.25: If you want to watch live, you can view it now on the New Journal’s website. What else you going to watch? Simon Marcus isn’t here. Maybe he’s watching the House Of Cards episodes he’s struggling to keep up with.

19.18: Sarah Hayward, Labour’s leader of the council, responds to the deputation – says Camden can’t change things until contracts expire. “We have to balance really difficult budget decisions,” she tells demonstrators. “We would have to cut other services..” Private companies Caterlink and Shaw have “refused to budge”, she says. She says up to private sector to cover cost until Camden has opportunity to re-let contracts.

19.16: Conservative finance spokesman Don Williams insists the Tories will bring forward London Living Wage for all in Camden. George Binette not really biting on that, instead says it’s ‘rich’ Conservatives to talk about London Living Wage because, he says, it was the Tories who caused privatisation of council services in 1980s. He says ultimate aim is to bring all council services back in-house and publicly run.

19. 08: George Binette from Unison is on his feet calling for Camden to bring forward its move to give a London Living Wage to all. A school catering assistant adds: “Do you know what I’m having for dinner tonight. A sweet jacket potato, for me and my son. That’s all.” Packed public galleries applauded.

19.00: Ahead of tonight’s all-member sessions, protesters are outside Camden Town Hall calling for care home workers and school catering workers to be paid the London Living Wage. Camden is committed to eventually paying the London Living Wage back in 2012 but says it has to wait for individual contracts to expire in some cases.