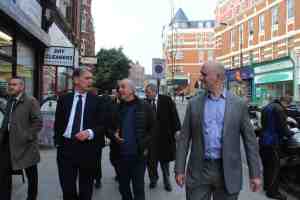 FOREIGN Secretary Philip Hammond was perusing the house prices in West Hampstead yesterday afternoon as an estate agent told him how prices had gone up and up and up in the area. The area had become more affluent, the Tory big hitter was told, and was now more of a spillover from Hampstead, rather than Kilburn. The expert from Hunters, Gideon Gold, was then asked by the Secretary of State Hammond for a prediction on which area of London would be next for a price explosion. Mr Gold said it might be too late to jump in on Hackney where the market had gone ‘berserk’, and it could now be time to look further east to make some dosh, to West Ham.
Mr Hammond: For an older politician like me, the idea that West Ham is going to be the next place…
Mr Gold: It’s up and coming
Mr Hammond: I fought a by-election in Newham in 1994.
Mr Gold: It’s the next Knightsbridge.
Mr Hammond: The next Knightsbridge, you heard it here first.

Richard Dawkins endorses Lib Dem candidate Maajid Nawaz for Hampstead and Kilburn, one of a series of glowing tweets.

Even if you don't support any other Lib Dem parliamentary candidate, please support the great Maajid Nawaz.https://t.co/NrZfLL3zz0

How on earth did Arsenal lose to this crap at home? #afc

As the CNJ revealed on Monday, Blustons may be closing in Kentish Town… but there’s one high street change that has been welcomed by London Assembly member and Camden Labour local Tom Copley.