21.47: It’s been a half hour to sit back and just watch these guys, mainly staring into their phones and ipads – so hopefully they weren’t looking for updates here. They look like they are ready to close this one down, almost boring themselves here – Jonny Bucknell has taken to giving transport advice for tourists in France -and get out for the final weeks of the general election campaign. The big one, however, is the Black Cap, councillors of all sides devastated that the pub suddenly closed last night. Danny Beales and Jonathan Simpson lead the tributes.

One day though, everybody who is speaking  at these meetings will just be delivering their contributions to rows and rows of heads bowed into an ipad screen. That’s the silicone playground, folks.

21.25: What a grass. T-Money just shopped JB for eating his roast duck in the chamber. “It’s not just a cheeky snickers”, he complains. Mayor reminds councillors that there is a no-eating rule in the chamber. Apologies to Cllr Bucknell, for sharing his dinner here.

21.03: One hour to go and Conservative councillor Jonny Bucknell is getting a bit peckish. Yesterday’s roasties… 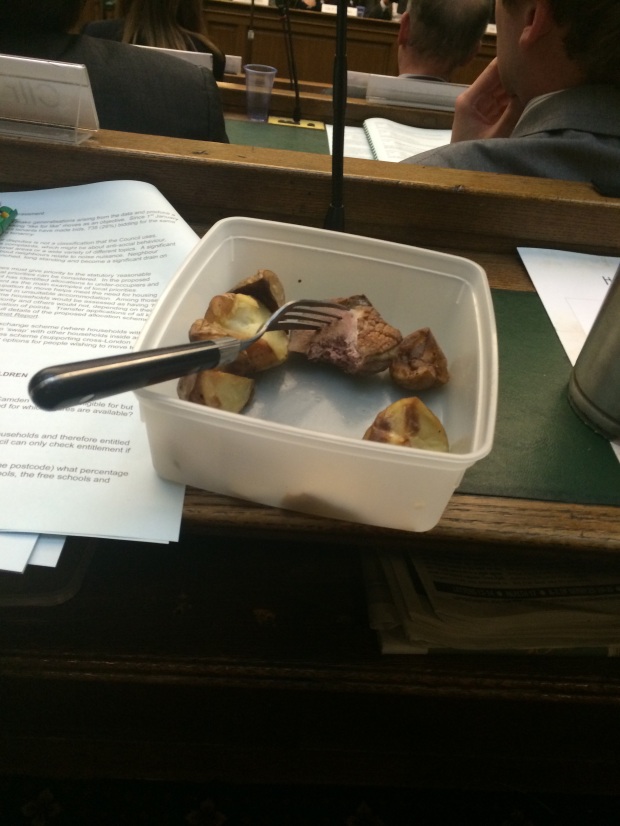 20.41: Culture and environment scrutiny now. Awale Olad says TfL has produced a ‘sexist’ report, which says women cyclists are more likely to be hurt/killed on the roads because they are less likely to jump red lights than men.

Awale Olad giving his report with Darth Vader mask staring at him pic.twitter.com/6Oyw07attS

20.34: Community safety boss Jonathan Simpson says appeals to off licence to stop selling high strength lager is having a ‘major impact’ on street drinking problems. ‘The disappointment is that Sainsbury’s, in their large stores, and Morrison’s have not embraced the scheme fully – but we’re working on it,’ he says.

20.20: They’ve done the environment debate, now we are onto community safety. Jonny Bucknell is raising busking, looking over at me as if I should be doing the research to back up his argument. He wants a bit more scrutiny on who has a busking licence and who doesn’t. Labour’s Jenny Headlam-Wells says the new policy of licensing appears to have been successful. To be fair, we haven’t seen DJ Grandpa outside of Camden Town for a long time. His crazy dancer man is still there, though. And Danny Shine The Megaphone Man.

20.08: There are only two people in the public gallery. Why, people of Camden, won’t you come? Why? If you come, you can see things like the Conservatives suggest Labour councillor Sally Gimson wear a Darth Vader mask because of the way the council deals with consultation surveys. 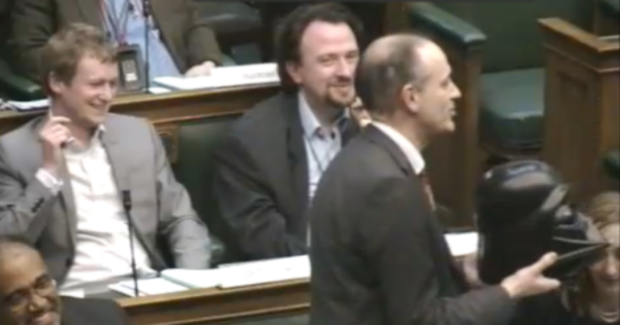 No time for "lols" props at full council. None at all.

19.54: Council meeting stalker Oliver Cooper is up on in the public gallery again. He could be in the show seats next time these guys all meet. He is the Conservative candidate in the Hampstead by-election.

19.50: CLL mentioned that T-Money was tracking her election campaign in West Tyrone on Twitter. The new social media guide for councillors being reviewed here tonight advises local politicians: ‘Treat others with respect, avoid personal attacks and disrespectful or rude or offensive comments’. There you go. But surely there aren’t any Camden councillors – surely – that would be rude on Twitter. Surely.

19.38: More mentions of the general election as council leader Sarah Hayward stands up for her full council speech. She says it is time to reflect on five years of the coalition government: ‘Cameron and Clegg’s government has bee littered with broken promises, all promises that they bribed voters with’. Conservative leader Claire-Louise Leyland responds with a similar political broadcast, stuff along the lines of: ‘You don’t know what you’re getting if you vote Labour’. Like a boiled down leader’s debate with Sarah H as Ed Miliband and CLL as David Cameron. Hopefully, all the voters will all be watching the webcast.

19.32: Camden Unison are the second deputation, demanding the council stands up against cuts and saves jobs at the Town Hall, or at least keep staff by re-deploying them. Camden is losing 30 percent of staff over seven years. Green Sian Berry joins in with a question that is a bit more of a statement, or a bit more of a cheeky election poke actually, noting that Ed Milband lives in the borough and therefore the Labour council should somehow be offering a stronger defence against austerity, somehow . T-Money, in reply for the Labour leadership, insists compulsory redundancies have been kept to a minimum but Camden is hit by ‘some of the toughest cuts in the country’ due to decisions made by central government. 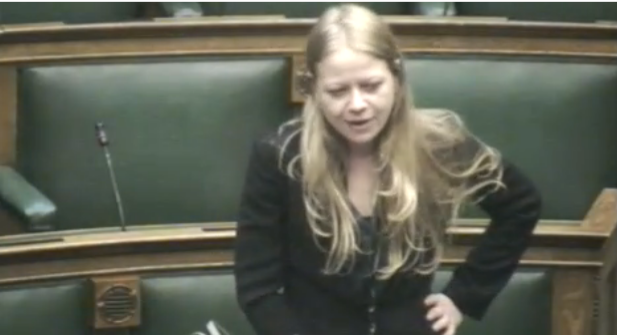 19.26: Nature reserve objectors leaving the public gallery looking a bit downhearted, about 30 of them up there.

19.22: Labour’s environment chief Councillor Sally Gimson looks a little frustrated here, she says she knows that change is sometimes difficult but adds: “I have a principle. This is public land should be used for public benefit in this case as a nature reserved for families and children to be used for limited hours at weekend.” She says it’s a trial, and if the ‘pocket park’ gets ruined by bad behaviour then the council and the London Wildlife Trust will bin the idea. “I’m very sad that this is so controversial because it’s a fantastic project,” she adds. “It’s public land and should be open for public benefit.”

19.18: Penny Gamez from Somers Town leads a well-supported deputation – well-supported by cheers from the public gallery, that is – which is a protest against council plans for to open up the nature reserve near the homes around Reachview Close. Protesters say opening the area up to the public will lead to anti-social behaviour. Before it was fenced off, they say, it was a magnet for drug deals and street drinking, and ‘hypodermics were thrown into back gardens.”

19.12: The council has heard a pretty cool presentation from children who have gone through Camden’s care system, and to whom the council are corporate parents too. The webcast is paused so they can share their thoughts with councillors privately.

19.03: Somers Town by-election winner Paul Tomlinson is officially welcomed to the council, takes a little bow amid whoops from the Labour ranks.

19.00: The last full council meeting before the general election begins with the arrival of Camden mayor Lazzaro Pietragnoli.