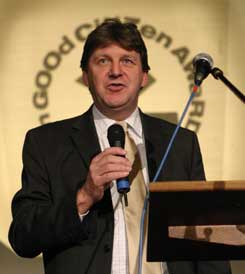 FAR be it for the pesky Camden New Journal to be the party poopers, but in a football match last night called to mark the retirement of Ham & High editor Geoff Martin, it would not have been credible to go easy on the rivals.

You can’t do that in a north London derby.

And so it was, your CNJ heroes came back from falling to an early 3-0 deficit at the Castlehaven sports pitch in Camden Town to race through to an emphatic 10-4 victory against a team made up of some of the reporters who have worked under Geoff’s 14 year reign at the paper up the hill. One councillor cycling past stopped to applaud.

Geoff couldn’t make his own testimonial match, none of us are getting any younger, but you could tell from the past and present H&H faces who came back to see him at the Washington pub in Belsize Park afterwards that through the years he has commanded respect, and engendered warmth, through his newsroom. He has after all helped school journalists who have gone onto the Daily Mail, the Daily Telegraph, the Guardian, the Evening Standard, and they seem appreciative of taking their first career stepping stones at Avenue Road.

I don’t know him well. He is not showy man and he didn’t use his position to endlessly pop up on the TV and radio. Some of his colleagues say he has an enigmatic quality that keeps you guessing at his politics, in doing allowing himself to play host to a rounder debate. There was a measure of the man to be seen from the outside when he allowed his news editor to openly criticise the paper in its own letters pages for its controversial decision to accept money for ads from the BNP many years ago now. He stood by his case for the ads being accepted, but allowed the counter-argument to be heard too.

Today we say a sad farewell to our wonderful editor @geoffmartin07 after 14 years at the Ham&High. We will miss him! pic.twitter.com/rcAJlZhxvQ

More recently, against the pull of the search engine, a pull which might just wreck quality journalism in the end if clicks matter more than content, he took a noble decision to ban the use of the nickname ‘Jihadi John’, simple word slang which had cheapened the crimes of a murderer in Syria who had gone to school on our news patch. He refused to allow Mohammed Emwazi to be cast as a cartoon super villain or baddie in a film when the bloodshed was so real and horrific.

Earlier this year, meanwhile, he wrote an editorial comment piece questioning whether people accused of rape should be publicly named before they are convicted, after a report in the H&H about a man cleared of all charges but who had said the false accusations had ruined his life because people had remembered the claims but not the result of the case. As such a practice of anonymity would cut across the editorial policy of most newspapers, including his own group’s, it seemed a brave suggestion to make. Admirably, he has been happy to walk his own course.

Geoff, it should also be said, also oversaw the fine idea of a reader’s edition of the paper, an astute way of getting back the two-way engagement which all local news providers require to thrive. Bringing in younger contributors particularly in this way will hopefully go some way to instilling in them that local news is important and affects them too, and not just something gran reads.

In a way the two papers have different styles, the H&H these days often splashes on crime, while we more commonly plug away with political stories (which given how few people know who their local councillor is, maybe we’ve got the formula the wrong way round). But there is, more often than not, an understanding that the competition helps drive the standards of the other.

(Almost always, he surely wasn’t talking about us in this rare outing on Twitter years ago…) 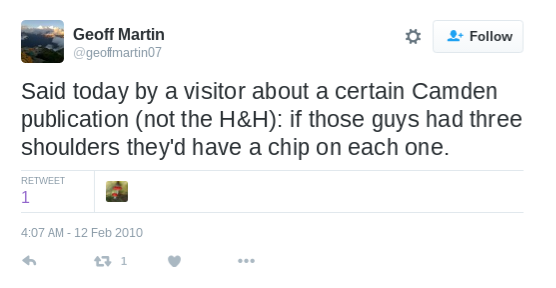 I wonder what Geoff sees for the future of a trade he has spent a lifetime working in. I’m sure we could talk for hours about how the game has changed over the last decade and a half and how it may change over the next 15 years too. But at the editor’s farewell, with the Washington’s wine fuelling happy tales of scoops and splashes, it was time to celebrate the fact that we still live and work in an area with such an engaged media (there are now black holes in London and elsewhere where there is no local newspaper at all), and pay tribute to a man who devoted a serious share of his career to the stewardship of one of the country’s longest running local newspapers.

Oh, and those ten goals.