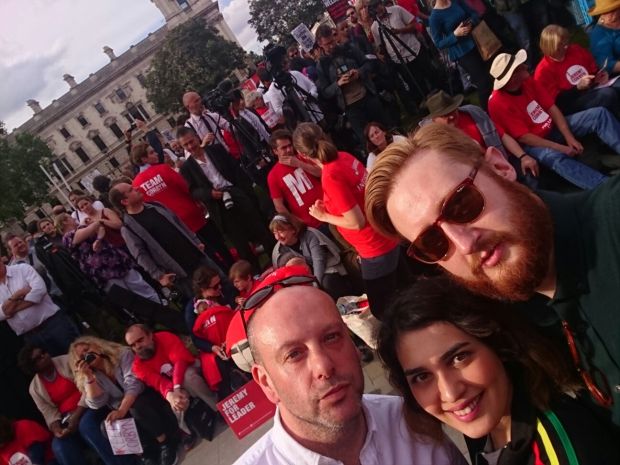 SARAH Hayward did fairly acknowledge that not everybody in Camden’s Labour group would agree were her belief that party leader Jeremy Corbyn must step down when she emailed her support for Keir Starmer’s resignation from his shadow team earlier today.

And so it was, just a few hours later, three of her council colleagues, the Kilburn councillors Thomas Gardiner, Maryam Eslamdoust and Douglas Beattie, could be spotted among the #KeepCorbyn rally outside Westminster this evening. There it was declared, that despite a double-digit number of resignations, Corbyn will not walk away. In the crowd, apparently, there was talk that the drip-drip, on-the-hour style of resignation had actually strengthened the resolve of the leader’s admirers. Corbynistas claim the tweeted ‘I quit’ letters, appearing like clockwork, had shown how his internal opponents had orchestrated their coup moves to drag out the story – and the pain – for the party, dividing members who should be working together at a pivotal moment. Left-wingers at the council still believe they have most of the ‘Corbyn XI’ councillors, a quarter of the group, onside despite the recent pressure. There was apparently a 12th player, a sub, in that team last year, but she refused to be publicly named.

In a warning shot to those who want to get rid of him before the Tories push for a snap general election, there was also a pledge tonight that Corbyn will stand again if a Labour leadership contest is triggered. The size of the crowd was meant to tell opponents that he’d win again too. Take in mind, though, that his opponents are not so sure about this, believing it’s a different playing field following the EU referendum and that Corbyn would find it harder against more charismatic contenders than he faced last year in the worried-looking Andy Burnham and the overcautious Yvette Cooper.

John McDonnell claimed 10,000 were there tonight. An exaggeration almost certainly. But Hazel Blears’ former special adviser Paul Richards risked sounding just a teeny-weeny bit pompous when he suggested the Islington Tribune’s Koos Couvee should remove a tweet that reported a crowd of 4,000 had gathered, claiming there had only been 400.

Seriously, imagine being troubled enough to publicly ask a journalist to delete a tweet about crowd numbers in the first place, but it seemed even stranger to do it when there were pictures bouncing around like the one below.