LILIAN Greenwood offers up the text of her speech to her local constituency party membership in Nottingham South in which she asks for understanding over her decision to resign from Jeremy Corbyn’s shadow team at Westminster. It seems like the polite thing to do in an era when resignation letters are filed to Twitter.

She was the shadow transport secretary, which obviously put her on a little bit of a collision course with Labour members in Camden, many of whom want the party to end its official support for the HS2 railway scheme. When she came here in 2014, she stuck to her guns, and spoke enthusiastically about the £50 billion project despite being among some of the country’s biggest HS2 sceptics.

It was admirable really that she did not adapt her views to tune in with the audience seh was standing in front of, as so many chameleon politicians do, but it turns out, from her speech, that her visits to Camden had some bearing on her decision to abandon Corbyn last month.

Ms Greenwood said in her speech: “I’ve been one of HS2’s strongest supporters so I when I took up the job in Jeremy’s Shadow Cabinet I wanted to be absolutely sure we were on the same page I met his Director of Policy to talk it through. We talked about the most difficult parts of the project, the impact at Euston in London. I’d been working with Councillor Sarah Hayward and her colleagues at Camden for more than 2 years to try and help them get what they wanted for their local residents. It had been very difficult. I’d been to visit several times, meeting residents and businesses and dealing with some hostile media. But we secured real concessions – changes that will make a difference to local residents. It didn’t matter that it was in a nominally safe seat. It was the right thing to do.”

The hostile media bit may have been an indignant speech bubble piece in the CNJ, (see above) which some readers may have thought to be too simplistic or cartoony but everybody knows where the paper stands on that particular issue and it ultimately summed up the mood in the room. In terms of what top rank politicians face elsewhere, Ms Greenwood will no doubt acknowledge it was hardly cry yourself to sleep stuff. 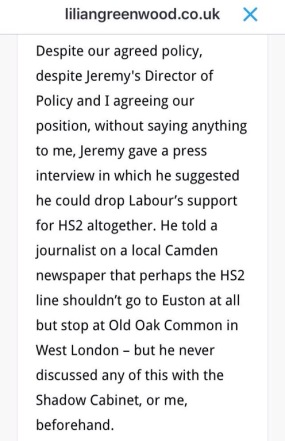 Ms Greenwood then went on to explain where the problem with Corbyn blew up over this, however. “Despite our agreed policy, despite Jeremy’s Director of Policy and I agreeing our position, without saying anything to me, Jeremy gave a press interview in which he suggested he could drop Labour’s support for HS2 altogether,” she said. “He told a journalist on a local Camden newspaper that perhaps the HS2 line shouldn’t go to Euston at all but stop at Old Oak Common in West London – but he never discussed any of this with the Shadow Cabinet, or me, beforehand. I felt totally undermined on a really difficult issue.”

That journalist was Koos Couvee, from the Islington Tribune, the CNJ’s sister paper, who was in Brighton covering the Labour party conference last Autumn. Corbyn, of course, had only just been elected leader then, but as HS2 was the biggest issue affecting our news patch, we wanted to know where he stood.

Given Ms Greenwood has vividly name-checked this incident in her reasons for resigning, it might be worth winding back to re-read what Corbyn actually said when he was buttonholed by our guy in the conference corridors and asked for a take on the demolition at Euston and the growing calls for the project to be moved to Old Oak Common, a view which Sadiq Khan, the new mayor of London, seems to have recently been interested in.

Corbyn’s quotes: “I support them [people in Camden] in trying to protect Euston. I want us to look very seriously at the Old Oak Common option. I can see a lot of problems with the Euston option because of the number of passengers who will be going on to the underground from there I will meet with Keir Starmer to discuss this and we will meet further with the shadow cabinet to discuss this as well.”

Ms Greenwood’s speech contains lots of other grievances with Corbyn, so it’s unlikely she’d be still be standing shoulder to shoulder with the Labour leader regardless of what he had said to Koos that afternoon. The EU referendum stuff trumps Hs2 in terms of sore points right now.

Corbyn’s supporters, however, will be scanning the comments which she says upset her so much in a search for the bit where he says he was thinking about dropping the party’s support for HS2 as Ms Greenwood claims – the unions like the project, and the title of the article is ‘Corbyn says yes to high speed rail’ – and where a policy decision was announced without consultation with his shadow team. She says he undermined her. He says in those quotes that he wants to sit down and talk about it.

In the meantime, while we’re sorting out who said what when, the diggers continue to close in.