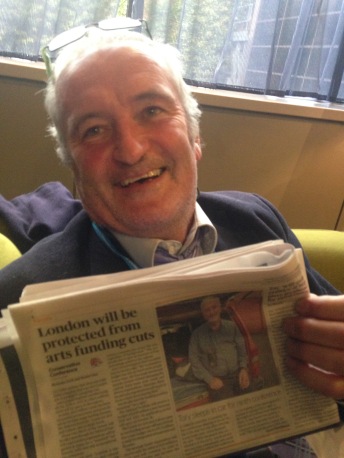 IF there is anybody out there who isn’t aware that Conservative councillor Jonny Bucknell sleeps in his car during conference week, rather than shell out money on an expensive hotel, whereyabin? Seriously. We might as well all go home.

So it was that in the Jury’s Inn bar in Birmingham last night, he was heckled by his own party colleagues for flogging the deadest of horses and spinning the same old yarn again and again, after appearing in the Evening Standard last night yet again talking about sleeping in his boot.

Calling him a master of the press game for getting publicity for the fourth conference in a row, Tories couldn’t believe his story, now honking like old socks, had made it to print again, having already featured in all the national newspapers and on the BBC over the years since his unusual set-up was first revealed, cough cough, in the New Journal back in Manchester in 2013.

“I didn’t call them, they keep calling me,” he insisted to his colleagues, as they ribbed him about his now annual car park photoshoot. “I’ll keep telling it until people stop being interested – but the hotels do cost a fortune.”