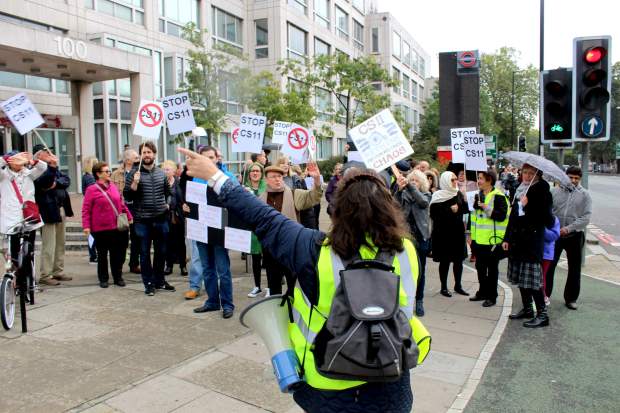 THE little blogging break here after conference season should not mean Oliver Cooper should go without an award for the most convoluted protest banner of the year. Whichever side of the CS11 debate you stand, this was a corker, the runaway winner. Not content with the ol’ red road sign and a plain STOP CS11, Cllr C went for ‘TFL Failed To Do Full Traffic Modelling’ and other catchy slogans.

The meeting of supporters and critics of the CS11 road map in Swiss Cottage last month was also notable for pitching former allies against each other. Sebastian Wocker, the publisher of the satirical magazine Hampstead Village Voice, can be seen backing the scheme in the video below, while community campaigner and virtual newspaper columnist Jessica Learmond-Criqui was on the loud-hailer in opposition.

To think, no so long ago they were singing Give Peace A Chance and calling for bongos while fighting the New End development together. It was a lovely, unforgettable duet back last May… but we may have to wait a little longer for theor difficult second album.