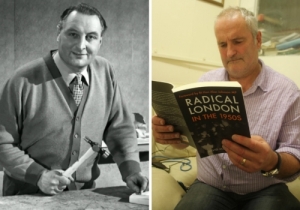 THERE are no hard feelings between Conservative councillor Jonny Bucknell and writer David Mathieson, who says in his new book Radical London In The 1950s that Jonny’s father was the first person to use a four-letter expletive on television. The worst Barry Bucknell, the old St Pancas councillor who was also a DIY tipster appearing on the BBC programmes about home improvements, would ever say is ‘bugger’, said Jonny this week.

The Bucknell family fear that a crudely-dubbed film on YouTube – clearly a spoof – is in danger of changing the records books by confusing obituary writers and researchers, and have considered asking the video-sharing website to remove it. It’s the third thing that pops up when you put Barry Bucknell’s into Google. Jonny said however, that in the end he felt ‘you can’t be too precious’ – within reason – about these kinds of things. “We never heard him swear at home,” Jonny said. “If anything he was a bit posh.”

Mathieson, a former adviser to Robin Cook, had written of Barry Bucknell’s telly antics: “The results were sometimes calamitous as his constructions collapsed or the wallpaper sagged. Normally, these disappointments were met with cheery stoicism and chippy ‘well – that’s not the way to do it’. Frustration and irritation with mishaps did occasionally surface, however, and this led him to another pioneering moment: he was the first person to use a four-letter word on TV when he exclaimed ‘c*nt’ as a miss-hit nail went flying.”