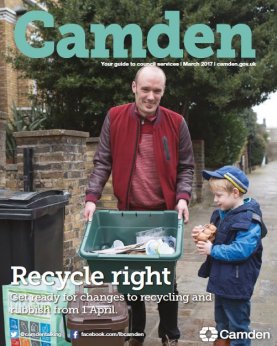 THE new issue of the Camden magazine is out, although we are still wondering what our former mayor Lazzaro Pietragnoli meant when he said the council’s good news only publication was “doing better than its opposite” while on his feet at the last all member meeting.

He had just said, provocatively some might say, that 60 percent of people got information about Camden Council from the Camden magazine, compared with 30 percent who he said learned it from the Camden New Journal.

This was definitely fact, you’ll understand, because he was equipped with a piece of paper – a council-run survey of 500 people, no less – which said so. It wasn’t just what’s left of the press bench (one journalist) who took his use of the word ‘opposite’ as a suggestion that he felt the Camden magazine was in opposition/opposite to the New Journal.

Or, as one of his Labour party comrades swiflty texted, that he was somehow intimating it would be wholly fine for a publicly-funded council publication – which residents all pay to be produced without the need of a sales revenue and distributed to every home in Camden – to compete with the very local newspapers that hold the Town Hall to account. That’s not his words, obviously, just how it was interpreted in some quarters.

Now the really funny thing about council mags is that every party in opposition thinks they should be spiked, as if doing so would solve everything. But then, once in power, local politicians suddenly see the importance of spending on communications. For example in this budget season, while Labour was attacking the spend on the Westminster Reporter, the local authority magazine in the Tory borough next door, it was conversely defending the Camden magazine to the hilt on this side of the borough boundary. Westminster’s magazine, the Conservatives will no doubt remind us, is delivered less frequently, once a quarter, but here’s former Labour group leader Paul Dimoldenberg view: 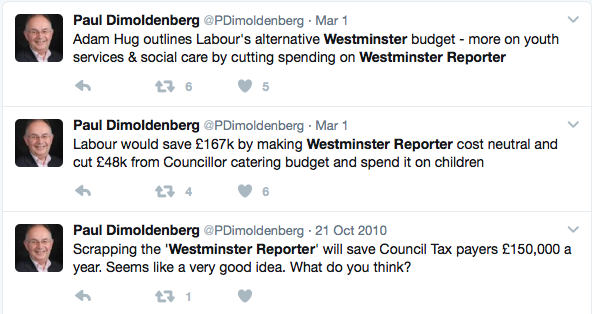 While politicians have this love-hate relations with the cost of communications, so do some residents, who want less spent on it, but then complain when a new policy catches them by surprise or leaves them arguing that nobody had asked them what they thought. The truth is Lazzaro has a fair deal defending the need for the council to talk to its residents. While there will always be a debate about cost and frequency, there is clearly a need for the communications department and for it to make sure residents have basic information about the local services open to them. People need to know that their local authorities aren’t just taking the bins away, that common misconception which strangely colours almost every debate we ever have on wot I’m payin ma’ council taxes for.

Camden, to its credit, has not gone down the route of the most excessive local authorities who have blurred the lines by trying to act like a straight newspaper; inexplicably there are councils who run things like court stories in their magazines. This idea was encouraged here by one enthusiastic councillor about ten years ago – no, not Theo – but the idea was sensibly parked. These days, the council could do its communicating more cheaply by booking information pages in the local papers and saving the cost of printing and distributing an entire magazine ten times a year, while at the same time feeling warm and fuzzy about supporting a free press but there you go, I would say that, wouldn’t I.

Beyond that, even the most one-eyed councillor understands that a borough with only the Camden magazine to read would, to put it mildly, be unhealthy. It’s not just about our paper, for the CNJ does not have a right to exist simply for the sake of it – the right to scrutinise is earned, with essentially our readers acting as our boss – but there are already too many areas in England, including some in London, which are either not served by a newspaper or have a synthetic title which asks no questions of public bodies and are often used as tricksy advertising vehicles.

Hyperlocal blogs, especially ones that capture the thoughts of its catchment area rather than just those of its authors, can add a new layer – often out of volunteer determination – but a local media with the resources to ask questions should surely be part of a healthcheck of any local democracy. Perhaps the best example in recent years of why this makes sense is the successful campaigns to save accident and emergency services at the Whittington, but I could bore on with lots of other examples.

Lazzaro explains his comments in our letters pages:

I simply pointed out that our residents’ survey shows that 60 per cent of our residents receive information about the council’s work from the Camden magazine (a double figure in comparison to the New Journal and other local newspapers) and questioned the Conservatives for proposing to close the magazine, while wanting to reinstate unaddressed letters on planning applications that were not effective at all.

He does not explain in his letter what he meant by that word ‘opposite’ and if he hadn’t used that word, his comments are unlikely to have led to a prickly response. As he’s a journalist and communications guy, a champion of the press, let’s take his word for it, as I think he’d miss the local papers if they were beaten down by their opposites.

If you return to his speech and his piece of paper, however, and that 60 percent figure he cites, maybe it is possible to flip it around and come to a different conclusion.

Camden, after all, has confirmed it delivers or tries to deliver to every home in the borough, and its magazine is exclusively about council news – not about crime, or the arts, or sport, or all the other things that people read local newspapers for. And yet, by these stats, around 40 percent of all households in Camden are getting a magazine nearly once a month and gleaning no information about the council at all from it.

* The editor of the Camden New Journal, Eric Gordon, is due to appear at the London Assembly’s Economy Committee, which is discussing the future of local news provision, tomorrow. The meeting starts at 10am.