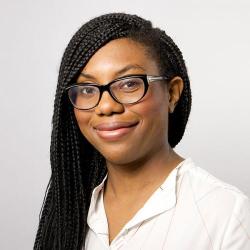 CONSERVATIVE Central Office has FINALLY worked out the final shortlist for Hampstead and Kilburn and London Assembly member Kemi Badenoch is the late addition to the contest.

She joins Henry Newman and Camden Conservative group leader Claire-Louise Leyland at the selection meeting in West Hampstead this evening. All 700 or so local constituency members have been invited. At a few days’ notice, they might not get that many through the door but it should be a lively turnout.

Each candidate gets half an hour in front of the members: a ten minute talk and then questions. The members then vote, looking for a candidate supported by more than 50 percent of the room. If none of them achieve that target on the first round, the lowest scoring candidate drops out and they go again.

The arrival of Ms Badenoch onto the list follows a withdrawal of another potential candidate last night. She was on these pages in March, taking on Labour AM Fiona Twycross over whether the appointment of George Osborne as editor of the Evening Standard should be discussed at a session debating the future of local papers.

Siobhan Baillie, who many Labour campaigners were privately suggested they feared most (and that was before the shortlisting), did not make central office’s final shortlist, despite having been nominated for a place by the local association.