AS good as they are at pricing up horse races and football matches to make sure punters never really get the better of them, we’ve seen before how the bookmakers find a little harder to work out what the market should be for constituency betting in general elections. Glenda Jackson, for example, was a peachy 7-1 (third favourite) to win Hampstead and Kilburn for Labour when the polls opened in 2010 and she came home a winner – just… by 42 votes. It’s one of the reason the bookies often cap maximum bets on politics and big wagers on individual markets can send the markets into a spin.

Glenda’s successor Tulip Siddiq will hope the bookies are all at sea again for the June 8 election after Paddy Power opened up the betting on the Hampstead and Kilburn constituency with her Conservative challenger Claire-Louise Leyland as the 1/8 favourite to turn the seat Tory (i.e. bet £100 to win just £8). If you fancy Tulip to hold on, she’s at 7/2. Remember, she started the last election around at around 1/4 odds to win, the favourite, so in two years this is a massive shift. 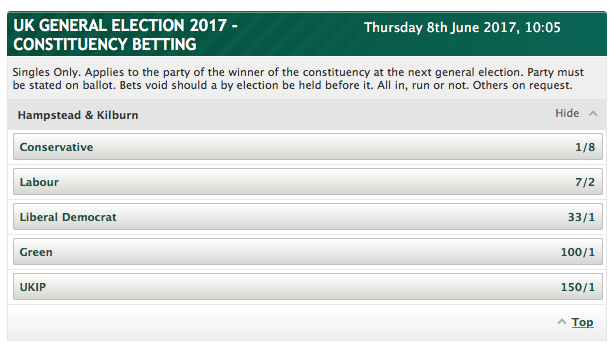 Paddy Power’s first stab at the odds are also not great reading for Labour MP Karen Buck who has a 1,977 majority but starts as the second favourite to Conservative candidate Lindsey Hall. 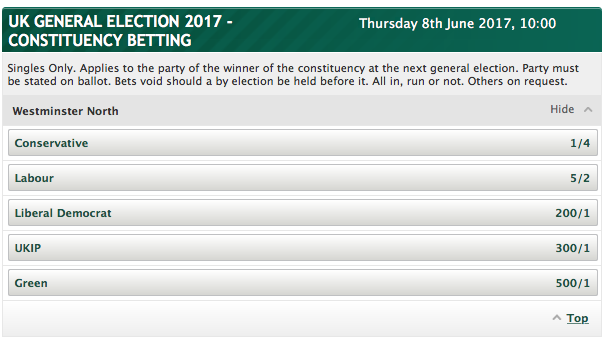 There’s better news for Labour in Hornsey and Wood Green, however, where PP think Catherine West will hold on against the Liberal Democrats, but they are hedging their prices and she is a weaker favourite at 4/6. 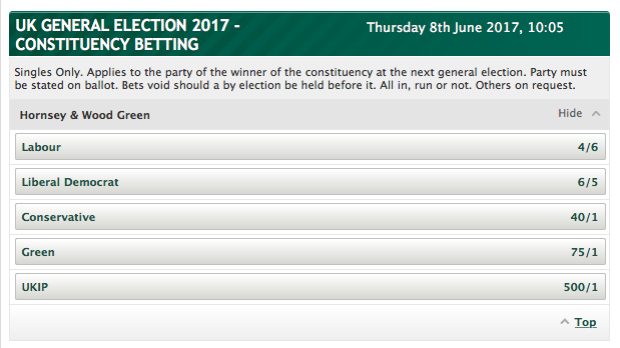 There’s a lot of mitigating features here to think about. Paddy Power are one of the first bookmakers to price up individual seats, presumably in attempt to snaffle the early bets. In trying to be first, they are having to take the plunge with prices that may not reflect the ground wars in different areas and the popularity of individual candidates seats. It will be interesting to see if these prices become uniform when some of their rivals get involved.

Secondly, as we said at the top, bookmakers are generally specialists in horse racing, football and online casino games. Politics is a novelty market for them, and if they lose a bit of money here and there – particularly with their losses capped – it cans seem worth it to them if it means new people open accounts with them, especially new punters who have been drawn into gambling by the election odds but may stay for something else before withdrawing any winnings. Win on the election, be hooked on horses by Christmas. That’s why we have to say, once more, don’t gamble kids, stay in school.