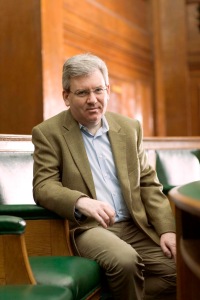 2018 begins with not the greatest shock in the world for Camden’s political circles: Former Conservative leader Andrew Marshall has announced he has joined the Liberal Democrats.

His decision will bring a smile to the faces of some of the Tories who served in the 2006-2010 coalition in Camden, during which there were grumbles that he was too close to the majority Lib Dem side of the partnership, and a sigh from the current crop who have had to listen to his warnings about the direction of the party. But he can hardly been written off as a fly-by-night, he’s a councillor of more than 25 years standing and previously stood for Parliament [Birmingham Edgbaston in 1997, lost to pro-Brexit Labour MP Gisella Stuart as Blair’s big win saw Tories lose seats like this].

And there he was, shortly after the New Year fireworks and a round of Auld Lang Syne, tweeting out his news… at 2.03 am from sunny Harwich according to the Twitter stamp.

It’s not a huge surprise because Cllr Marshall had quit the Tories last February in protest at the hard Brexit he sees the government steering the country towards. “Brexit is a mistake, and I don’t want any part of it,” he said in his explanation. He has since questioned how pro-Brexit Conservative candidates will fare at May’s council elections, given the borough’s heavy Remain vote in the EU referendum. 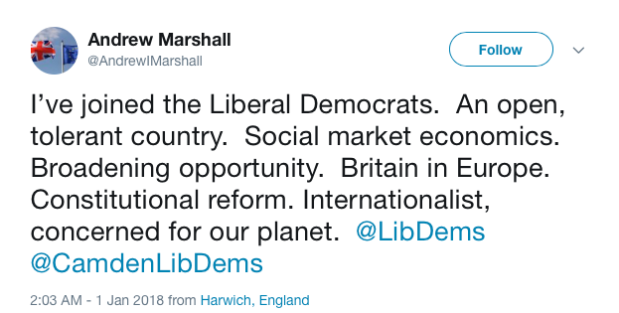 If he stands again in Lib Dem rosette, he could find himself up some of the candidates he was referring to in his Swiss Cottage ward where he currently sits as an independent and sends out a regular neighbourhood newsletter. In the meantime, the Lib Dems now have two councillors in Camden, enough to constitute a group in the last few months of this administration.