WE’RE NOT JUDGING ANYONE…

IF you want to know if anybody who is behind Camden Council’s new public information campaign urging cannabis smokers to think twice about their ‘bit of weed’, actually puff a little bit of weed themselves, all you can do is ask. So the question went in this week to community safety lead Nadia Shah and council leader Georgia Gould and, what do you know, both Labour councillors said they’d never ever touched the stinky leaf.

It’s a can’t-winism, but maybe this absolute clean sheet – not even one drag down the rec at 17 – will count against them in some tokers’ eyes. If you remember when Home Secretary Jacqui Smith made her unnecessarily fulsome apology for smoking cannabis at university 25 years before being in charge of the drug’s reclassification, she said at the time: “One of the things about being a politician is that you are often criticised for not knowing what’s going on. I hope that my experiences in my life have actually helped me understand that I do want crime tackled”.

Beyond the personal choices of politicians and the slightly dated poster designs, it’s possible to feel the heart is in the right place with this campaign, even if on the surface it will feel like a fun sponge for the disco crowd in Camden Town who will be confronted with a warning that their partying has ruined someone else’s life, as they wait for a night bus home this Saturday. There’s no doubting that there are dots to be drawn from what might seem like minor street deals to a wider drug market and eventually to the rivalries fuelling some of the atrocious youth violence which has scarred London in recent weeks.

HOME AWAY FROM HOME

ELECTION candidates competing for a green leather seat in the council chamber will not have long to get comfy if they top the polls on May 3. With Camden ready to refurbish the Town Hall in King’s Cross – they’ve got the ubiquitous Lendlease on the job, see today’s CNJ – councillors will move to the Crowndale Centre near Mornington Crescent Underground Station for their meetings by the end of August. And they are not expected to get back to Judd Street until 2021. Here’s how the council expect the temporary chamber to look. “It will be fitted out in a more flexible and modern style than the Town Hall chamber,” the council press office said. “It will benefit from better webcasting, audio visual and voting systems, which will all be re-used back at the Town Hall.”

CAN I HAVE A SELFIE?

HAMPSTEAD and Kilburn MP Tulip Siddiq’s selfie scrapbook swells a little more as she asks Bill Oddie for a photo. You can almost see the ‘what are you doing?’ thought bubble above Conservative councillors Oliver Cooper and Stephen Stark in this photo, as they watch her in full champion souvenir hunter mode before the planting of new trees in Hampstead High Street on Monday. The ‘Bill and me’ pictures seem destined for a private collection, however, as the MP is undergoing something of a digital detox. She hasn’t tweeted since January 11. Abandoning social media is meant to be one of the most rad things you can do these days, hipsters tell me at hat parties, but 70 days without Twitter is quite a stretch for a politician.

JUST ANOTHER QUIET NIGHT AT THE KINGSGATE COMMUNITY CENTRE

THERE was what sounds like an uncomfortable annual general meeting for Labour’s constituency membership in Hampstead and Kilburn last night. The upshot is the CLP has a new chair but as ever there is more to it than that. More soon.

BACK to the subject of youth violence: It is the ‘silent march’ in Camden today and the opportunity for a show of unity. Hopefully, politicians with something to contribute from all parties will feel welcome to join the demonstration. It starts at 4.30pm in Malden Road where Sadiq Aadam Mohamed was stabbed to death, one of two murders in the same horrible evening. It will then make its way to Harrington Square, close to where Sadiq’s brother, Mo, was murdered six months ago.

THE Liberal Democrats entered unchartered territory by winning three seats in Kentish Town in 2006, aided to some extent by Labour’s procrastination over what should be done with the crumbling Prince of Wales swimming baths. Bits were coming off the ceiling, it was in disrepair and expensive to fix. One idea was to add a swimming pool to the nearby Talacre Sports Centre and sell off the costly Victorian pools. Labour eventually pulled back from this thought and pledged to restore the building – cue claims of a ‘flip-flop’ – but by the time they did, the campaign ‘save the baths’ was in full, unstoppable swing. Lib Dem candidates in the ward, led by Phillip Thompson, took full advantage. The baths were later refurbished, a job done well.

Mr Thompson, happy to campaign in his swimshorts if needs must, didn’t seem to love being a councillor once he had won, however. He had little choice but to step down when it was revealed he had enrolled on a PhD course in Arizona shortly after his election. As you can see, the Greens were also on hand for a photoshoot; no swimwear, just a fully-clothed pretend dive. Adrian Oliver, the former Green councillor on the left of the bottom picture, recently stood as a parliamentary candidate in Poole. 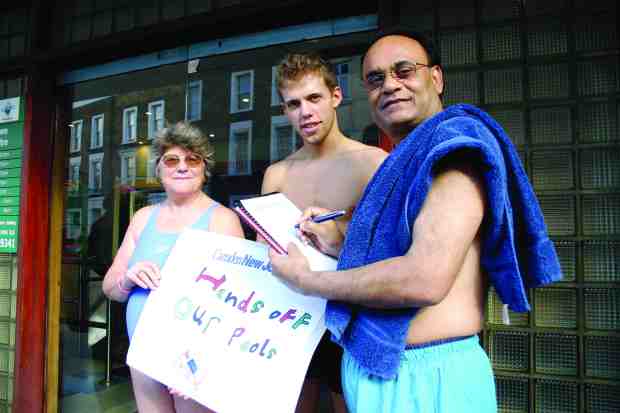