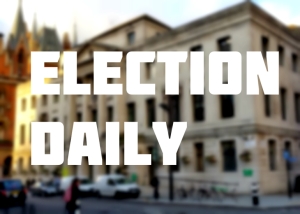 THE NINE WARDS IN PLAY?

DAVE Hill, the former Guardian journalist and blogger now running the On London website, last week hosted a discussion in King’s Cross on what may or may not happen at the council elections. The website was launching a new borough-by-borough guide, which Mr Hill has compiled in collaboration with Lewis Baston, a political analyst who once stood as a Labour election candidate in Swiss Cottage. The document represents their view of the political landscape across London and makes mini-predictions about the possible results in individual wards.

Of course, despite 30 days of blogging here and my attempts to get you interested, the reality is that Camden will not be the first chapter that local government spotters rush to, given the predictable nature of the overall, broad result in our borough. The authors, unsurprisingly, report that the council will still be in Labour’s hands at the end of next week.

Only Frognal and Fitzjohns can be considered truly safe for the Conservatives, their analysis suggests however. It then adds that there are nine wards in play to varying degrees: Gospel Oak, Kilburn, Haverstock, West Hampstead, Highgate, Fortune Green, Belsize, Swiss Cottage, and Hampstead Town. 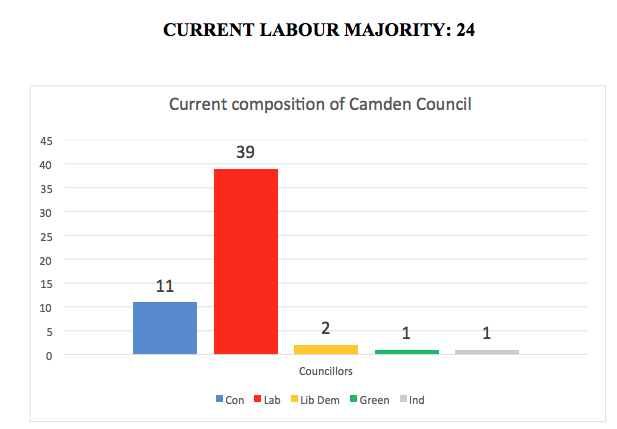 I cannot simply reproduce everything they’ve written, as the full report is available for £1 and the money will be helping the On London site develop after its recent crowd-funder. For the benefit of the Lib Dems, who feel (wrongly) that their efforts in Belsize have been somehow overlooked by the CNJ, however, the report marks the ward down as a real three way marginal. It also notes Flick Rea in Fortune Green is at risk, but describes her as “something of a legend” with “an indestructible aura”.

Hampstead Town, the authors say, “is the big prize that dangles before Labour, but possibly just out of reach”. It adds of the ward, currently held by three Conservatives: “Interest in local politics is high and voters are willing to split their tickets, hence the ward being shared between the Tories and Lib Dem Linda Chung for a while. Although Chung lost by a narrow margin in 2014, Labour took a clear second place to the Conservatives in a 2015 by-election and astonishingly pulled ahead by a clear margin in the 2017 general election.”

Remember, if you don’t like that assessment, see them, not me. I’m just reporting what they’ve written, and it’s of interest as they are the only people who seem to have assessed the possible outcomes of the local elections across the whole of London. You can buy yourself a copy here.

FLUFFY SAYS GO OUT AND VOTE 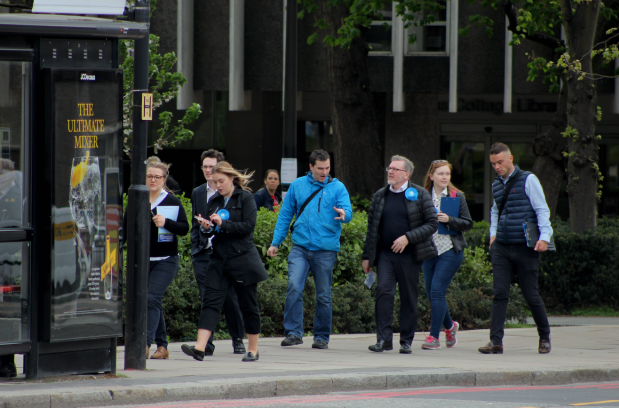 ANOTHER day, another Tory minister or MP turns up on a canvassing session in Camden; the Conservatives will not be beaten quietly. This time it was David Mundell, the secretary of state for Scotland (third from the right) who joined the doorstep crews in Belsize and Swiss Cottage. He may not be one of the government’s household names, but Douglas Beattie, the Labour councillor, must know him well: they stood against each other in at last year’s general election, north of the border. Sadly, I couldn’t draw any gossip out of Mr Mundell about how things had gone down in their duel in Dumfriesshire, Clydesdale and Tweeddale.

Fluffy, as he’s apparently known by fellow Tory MPs, had a message about making sure Conservatives actually use their votes, amid what he seemed to suggest was a bit of election fatigue.  “We had two general elections within two years, and you’ve got to work hard to convince people that local elections are important,” he said, as the Conservatives stopped for crisps and a (soft) drink in the Olde Ye Swiss Cottage pub at lunchtime. “Many people don’t realise that actually the council takes some of the more important decisions that affect their day to day life.” There is some level of confidence that if the Tories can actually get their natural vote out in some of these wards, then they will be spared the meltdown story. That’s always easier said than, however.

IT’S DIFFERENT FROM A BAR GRAPH

THE Lib Dems are not beating around the bush in Haringey with a call for supporters of all parties to back them in Fortis Green, not just to beat Labour, but to beat… Momentum. ‘VOTE STRATEGICALLY TO DEFEAT MOMENTUM’, a letter leaflet shouts, beginning with that label ‘far left’ and going on to include a suggestion that a vote for Labour would be ‘condoning the anti-semitism within its ranks’.

If nothing else, it’s different from the lop-sided ‘Conservatives can’t win here‘ bar graphs you more often than not see on Lib Dem literature in wards where they are battling Labour head-on. It’s a real attack dog letter. Its author, Lib Dem candidate Justin Hinchcliffe, has of course asked voters to vote strategically before. A former chairman of the Conservative Association in Haringey, he was still a member of the Tories when he sent a letter to voters ahead of the 2015 general election advising them to tactically support Lib Dem MP Lynne Featherstone in her two-way battle with Labour. Perhaps, it’s not a surprise then that he bats for the Lib Dems in a more official capacity these days after switching sides.

Embed from Getty Images
WHETHER you wanted to or not, you probably saw Terry Hutt, pictured here on the right, all Union Jack’d up and waiting for the arrival of the latest unelected Royal baby. He’s the eccentric every reporter races to when they are sent out to do a ‘colour’ piece about the crowds outside the hospital. The retired carpenter is well known in Camden, however, often campaigning for better services for pensioners. One of his favourite partners in crime was the Town Hall’s most famous heckler Ellen Luby, bless her angry soul, although I’m not sure they would’ve seen eye to eye on the monarchy.

FACE IN THE CROWD

LABOUR councillor Rishi Madlani is featured in a new film released this week by Kick It Out, the campaign to make football more diverse and inclusive. He is a superfan of Leicester City and helped set up Foxes Pride, a group of LGBT supporters which meet up at matches and more widely help fight homophobia in the stands. That’s two good things about Leicester: the fans tackle prejudice head on, and, as the stats will show you, they NEVER beat Arsenal away. What I can’t understand, however, is why we never see Cllr Madlani turn out for the Camden Labour football team at charity matches against the press?

HERE’S a more formal Cllr Madlani, never knowingly seen with his top button done up, at the 2014 council election count alongside his great pal Tom Copley, the London Assembly member. Mr Copley, if things had panned out differently, might have had a life as a Camden councillor, missing out in Haverstock in 2010. He was a prominent campaign organiser; once claiming he came up with the Obama-inspired slogan for Ken Livingstone in his mayoral campaigns: Yes We Ken. While he still has friends (and one or two enemies) in Camden, his scene is now in south London and next week Mr Copley is almost certain to be elected as a councillor in Sydenham.