A WEEK to go to polling day means letters sent to the local press from here on in will be pretty futile, if they are only aiming to influence the vote for one party or another next week. That’s why the letters postbag was so full for the last fortnight, a mass which meant it would have been impossible to have printed them all. Literally, the whole paper could have been filled with letters this week, there were scores of them.

The CNJ is lucky to have engaged readers and this section is always lively with debate, but there is something uneasy about those who only write in on the eve of an election, suddenly insistently innocent that they don’t write often and could we be so kind to include them this time. It’s more the merrier, get your letters in but maybe some of the authors should put themselves up for the public debate all through the season and not just when decision day is upon us. 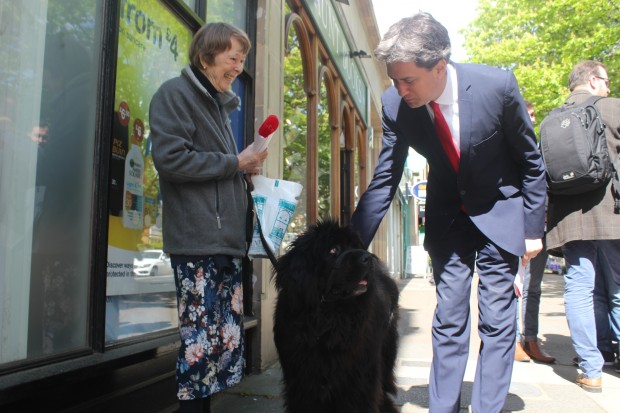 HERE’S an observation everybody has made when encountering Ed Miliband at any point over the last two years, but yesterday he was doing something official on our patch so I’m going to make it again. The guy looks like he is absolutely loving life. When we used to run into him at events while he was Labour leader, he always seemed a little weary, giving off that slightly geeky air which he eventually tried to shed by telling Jeremy Paxman: Hellya I’m tuffinuff. Nowadays, a podcaster and radio presenter, he seemed unshackled, and confident enough to dodge a question without looking sheepish about it. He seemed broader, in a boss way, had the big hair and passer-bys were asking him for selfies.

The woman with the big dog seemed delighted to have run into him; she was American and couldn’t vote in the elections but agreed to take a Labour poster. I felt urged to ask him whether he thought he was more popular now than when he was leader; he guffawed and turned away. It was true, Miliband looked like a man escaped. On a micro level, it reminded me of the knowing expressions you sometimes see traced across councillors who find the hatch out of the Town Hall.

‘A DISASTROUS TEA WITH GLENDA JACKSON’

SOMEONE whose feels do not seem to have changed much since they left politics is former Hampstead and Kilburn MP Glenda Jackson, who was interviewed by the LA Times this week about her impressive return to Broadway. To be short, it was reassuring that a correspondent on a big US title had the same experience as the rest of us back home in London.

Theatre critic Charles McNulty’s account of their meeting is peppered with references about her impatient, irritated responses. So, it wasn’t just us, after all. “Jackson’s clipped replies and occasional pounding of the table with her hands made me wonder if this Labour Party stalwart had mistaken me for the Conservative opposition,” McNulty writes. “Her default position of peremptory bewilderment — “I have no idea what you’re asking me ” — was perplexing. My questions about her reemergence on stage after her long break from acting to serve as a member of Parliament seemed to me fairly straightforward and innocuous. I had come to worship Jackson, not to grill her. I left expertly filleted by that trademark voice she still wields like a scalpel.”

I remember that feeling (not the worship bit, just wanted the odd interview). More often than not, Ms Jackson was cold when you phoned her. It always seemed an effort for her to explain what she was doing for the constituency, and to be frank she came across as unnecessarily rude. And yet, like a game of Russian roulette, on other occasions you’d phone and you’d got lucky, she would be suddenly warm and call you ‘hun’ out of nowhere.

She is a riddle, albeit an intriguing one because it’s a natural obtuseness, not an artificial one to sell an acting career. When she finished in politics, I wasn’t even sure where she’d place herself on the political spectrum. No doubt it would have been cast down as a stupid, pointless question if I’d asked her direct. 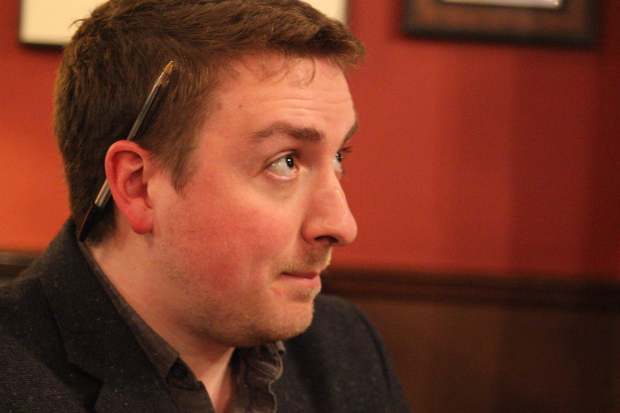 THE Holborn Voice hustings yesterday were probably the best structured I’ve been to during this election campaign so far, largely due to the lively chairman, Stephen Hargrave, who did not let the panel wriggle out of giving proper answers to the questions. He began with some himself, little prickly, slightly light-hearted tester questions for each candidate before the meat of the meeting. For Liberal Democrat candidate Andrew Naughtie, the journalist son of former Today programme presenter Jim (pictured), Mr Hargrave mused why his tweets were set to private, or invitation only.

“Being a journalist encourages certain types of responses when you tweet which are not that helpful,” replied Mr Naughtie. “Even if you are not that active, if your tweets are visible, people still troll you. Bluntly, it was a waste of my time.” Before moving on Mr Hargrave responded with the teasing line: “I’d say it’s come to something when a journalist tries to hide what he’s got to say, and we’ve got to seek his permission to access it.”

Such an exchange might make you think the Holborn and Covent Garden ward is a social media political hotbed, but you have to smile; of the current sitting Labour councillors, Julian Fulbrook is never knowingly seen on Twitter, Sue Vincent is a sporadic adopter and Awale Olad for many, many months did exactly what Mr Naughtie does and kept his output, largely about Manchester United, reserved for approved readers only.

More soon on the Holborn hustings.

AS it happens, some of the most interesting local level politicians in north London are ones who do not feel the need to tweet every minor achievement seconds after they achieve it, or worry that nobody will know they were at a worthy event unless photographic evidence is available instantly online. There are occasions, however, for our councillors and candidates, when a tweet is very much required… like if you come across a creature like this while canvassing: The rest of Camden’s field of candidates are going to do well to snap a doorstep greeting as striking as Labour’s Lazzaro Pietragnoli’s encounter with a “wonderful sphinx cat”.

GIVEN there are wards in Camden where candidates may win by margins in the low double digits and things like personal appeal and specific ward issues can have a sway, it’s always best to be a little guarded by a poll measuring voting intention across the whole city. Information from the team-up between YouGov and Queen Mary University can, however, be added to the mix of guides behind our guessing game for next week’s election matchday. Labour is still way ahead, but have been clipped back on these graphs enough to make pollsters predict that the Conservatives will have less of a migraine holding onto the party’s beloved Westminster Council.

HISTORY WILL BE MADE

IF you picked up a copy of the Camden New Journal today, you would have seen the big, big news: the council has ordered its first ever Portakabin polling station. The temporary structure has been organised for a spot near Beckford School in West Hampstead, after staff apparently objected to closing the school on election day. It would be slightly understandable if that is the case, given the messages all schools are often asked to send home to home to parents about the dangers to their child’s education if they miss even one day of lessons.

Here’s one of the Portakabins used in Haringey:

THE DAY THE GOOGLE CAR WENT PAST

ON the subject of the polling stations, who remembers when Labour got itchy over prominent Conservative posters being up at a house next to one in Swiss Cottage back in 2015? They said it was a breach of the rules.

But something to file under ‘things you didn’t notice at the time’: the day of the general election last year was, by coincidence, also the day that Google sent its all-seeing, Streetview camera eye to West End Lane – and if you look at the photo it snapped outside West Hampstead Library, you have to wonder if the red posters in the windows, retained above a library polling station on election day itself, would be equally against the fair play regulations. 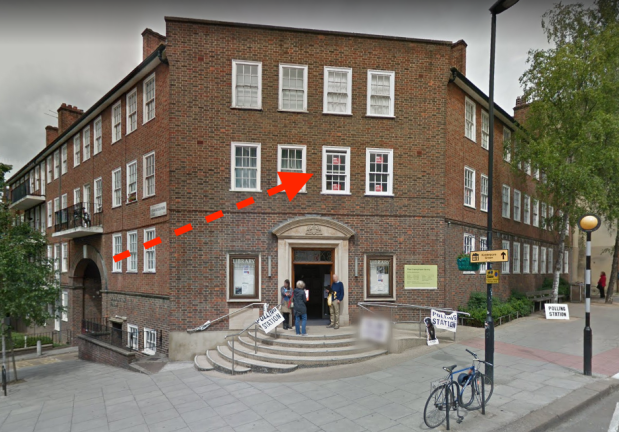 EIGHT years ago, the council election count was at Haverstock School and they tallied up the Town Hall ballots on the Friday afternoon, like Islington and Haringey will quite sensibly do next week. There was no choice in Camden to delay to the next day in 2010, however, because the red-eyed counters had been working through the night on the parliamentary elections, held on the same day.

This meant Glenda Jackson, as mentioned above, was milling around joining in the congratulations for Labour councillors busy taking back control of the Town Hall, the MP herself having been returned, remarkably, with a majority of just 42. Her son Dan Hodges, the Mail On Sunday columnist was there to say well done, Despite everybody’s collective lack of sleep, it was one of her sunnier days in front of the press. 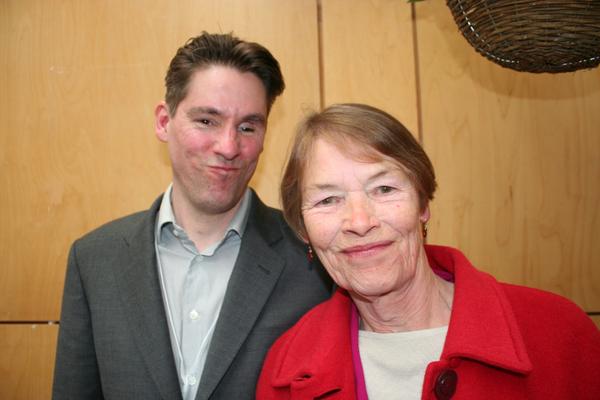