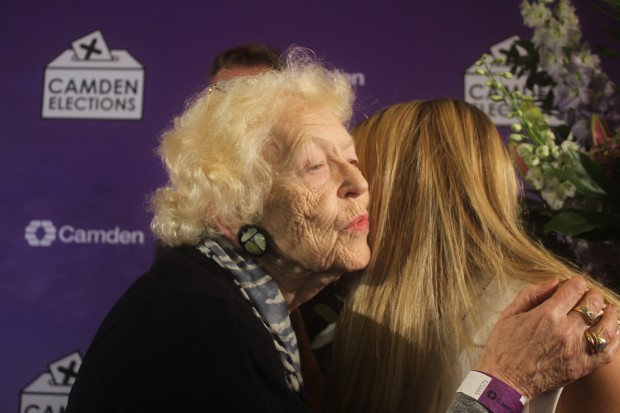 AS we probably already knew, you don’t get rid of Flick Rea so easily. The nuke-proof Liberal Democrat councillor clung on when all around her lost their seats in 2014 but had been put on notice that she was at risk of joining them out of the exit door this week.

And yet the people of Fortune Green, you suspect including some natural Labour voters among them, came out once again and supported the grande dame of the council chamber. Whichever party you support, there is something uplifting that a councillor can achieve this level of personal support, even in a churning neighbourhood around West Hampstead. I was lamenting before the polls how so few people seem to know who their local councillor is. That’s not the case with Cllr Rea.

I know some Lib Dems felt the more enthusiastic attempts to unseat her were distasteful given Labour’s existing lead in Camden, especially when resources could have been sent to more pressing projects in neighbouring Barnet, where the control of a whole local authority was at stake. When the party was asked where Sadiq Khan should play star guest on the eve of the election, it chose to throw the focus back on Fortune Green.

One of the reasons for the extra Labour effort was a concern that if Cllr Rea won, the council’s chancellor Richard Olszewski – a key figure in Georgia Gould’s set-up – could be run out by one of his own Labour colleagues in a 2:1 split. He was only 27 votes ahead of the fourth place and ultimately unelected candidate Sorin Floti, and there was briefly a waft of panic at the count when the jumbled Labour data early in the evening suggested he may have lost his place.

Cllr Olszewski and Lorna Russell were, of course, re-elected in an as-you-were result, and you actually get the impression that Cllr Rea is rather glad they went full throttle. The fact the Lib Dems felt kitchen-sinked in the ward adds to their pride at holding their ground. It all ended with a hug and kiss on the cheek, see above, and you sense there was less election-heat animosity in Fortune Green than in the split-ward contest over in Highgate. Surely because it’s hard not to respect Cllr Rea’s durability.

Thirty-two years after she was first elected (677 votes was enough to top the polls in Fortune Green back in 1986), Cllr Rea is still standing and now has a couple of colleagues to share the workload. It’s a length of service which should probably be recorded on the civic floor. You look at the marble hall of fame welcoming us to the council chamber and those other lifers, Roger Robinson and Julian Fulbrook, appear due to their mayoral years, but there’s nothing to mark the months, years and decades that Cllr Rea has invested.

The sorrow among some Lib Dems is that Labour are resolutely against sharing the mayoralty. In fact, the position is so in vogue among Labour councillors that some form of mediation has gone on to try and decide smoothly who will be Jenny Headlam-Wells’ deputy this year, and therefore the expected mayor in 2019. It hasn’t always been such a popular position, but Labour will not share. It’s their prerogative, and will be for the forseeable.

Maybe it would be easier for the Lib Dems to stomach if Labour had not accepted a year of mayoralty between 2006 and 2010 when it was offered to them while they were in opposition. Nural Islam had a year with the chain, but the offer was not reciprocated when Labour regained power in 2010. Without meaning any disrespect, Mr Islam’s time at the Town Hall is likely to be a footnote in the writing of Camden’s political history compared to Cllr Rea’s.

Who’s to say Cllr Rea even wants to be the mayor? When the Lib Dems had that grasp of power, she chose to be the borough’s leisure chief and saw through the refurbishment of the Prince of Wales baths. She would no doubt have preferred her name etched in the Judd Street marble under the list of leaders of the opposition.

You wonder, however, if Labour had stretched to offer this ‘immovable boulder’, as I think I’ve referred to Cllr Rea before, a year in the mayor’s parlour and a marble carving whether she might have called it a day under her own steam. It would be ironic if Labour kept trying and failing to unseat Cllr Rea, when a one year share of the mayoral chain could be more effective than leaflet bombing and bringing in Mr Khan.

Either way, the Town Hall is being redone later this year and there’s a chance for some new decor. The tribute to Michael Foot, one of only couple of local figures to have been given the freedom of the borough, is apparently being dismantled in the far corridor. Maybe there could be some way of honouring councillors who have clocked up 30 years service. To do such a stretch among the safe seats nest of the ruling Labour group is impressive, to do it in opposition even more so.