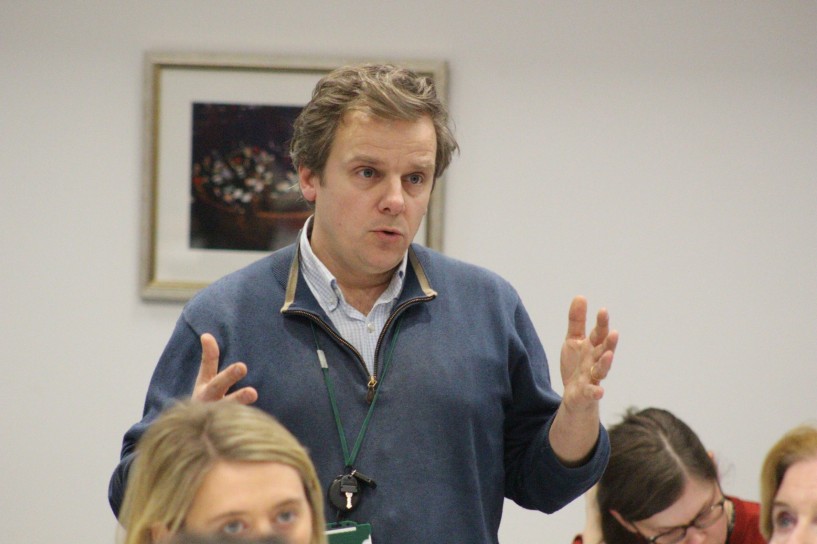 THE fallout from the Mayor’s inauguration ceremony continues with Labour’s chief whip Lazzaro Pietragnoli telling colleagues today that he is “truly and honestly shocked” by the anonymous attack on Maryam Eslamdoust over the cost of the celebration. Shocked may not be the obvious word given the often combative group relations among Labour councillors, but he also calls it “terrible behaviour”.

One of the group had, to recap slightly, been as unsubtle as can be with a dagger  soundbite to the Ham & High: ‘Clearly socialism starts at home and socialists have very expensive tastes.” The story was reheated by the Evening Standard‘s diary column last week, which reminded readers that Cllr Eslamdoust works for Jeremy Corbyn in her day job.

While opposition group councillors were named in the Ham’s report of the £11k bill, the briefer from the Labour group took anonymity; as, to be fair, our local politicians have often done on these pages. And with Cllr Eslamdoust describing the attack as ‘misogynistic bullying’ yesterday, a guessing game, if game is the right word, continues over who he or she was.

All of this is perhaps not how the average new mother spends her first weeks as a parent – breaking off from the nappies to complain about ‘nasty attacks’ – but this is Camden’s Labour group, right? It can be pretty brutal on all sides, and we now learn there’s no maternity leave free pass either.

Two probably irrelevant asides: If you want a mini-sense of the feeling towards Cllr Eslamdoust – and her husband Councillor Thomas Gardiner – you can wind back to the CNJ story about her giving birth to baby son Xerxes earlier this month. Usually when a local paper publishes a personal story like that, Labour colleagues fall over themselves to tweet congratulations. Not this time, even Pat Callaghan’s tattoos got more love on our Twitter story radar from Labour councillors. Now you may think social media love is the most synthetic of all love, but this gang serve it up week in, week out… and yet hardly any of them wanted to show even a hint of joy at the new arrival.

Secondly, after yesterday’s blog about Cllr Eslamdoust’s accusation of bullying, there was some sharp grumbling backstage among those who do not accept her gender had anything to do with the cost of the party. But the No. 1 takeaway that many of her colleagues were buzzing WhatsApp and text messages with last night was her view that some councillors had deliberately turned up to the occasion in “sloppy clothing”. Regrettably, the joke at the Town Hall used to be that you could tell the difference between a Ham reporter and one from the CNJ because the Ham would be wearing collar, tie, suit, etc while we urchins had beat up shoes, stubbly chins and a creased shirt. So I’m not in a great position then to spot who she meant but you might be able to see on the council’s webcast recording…  From memory, at least one of the guests – not a councillor – was wearing a tshirt with the message ‘Make America Pay Reparations’ across the front.

We are getting distracted. More to the moment, Cllr Pietragnoli has today once again had to step in with a call for calm within the group. NB: the photo of Cllr Pietragnoli above was not taken at the mayor-making ceremony, for those now looking at who is wearing what…

The text of his email to the group demanding unity is below:

I am sorry I have to write to group once again on a disciplinary issue, but I was truly and honestly shocked to read on the Ham&High that a member of the Group made anonymous comments on the Mayor making ceremony, comments that are highly damaging not only for Maryam personally and for the role of the Mayor, but for the administration as a whole.

This is indeed a terrible behaviour and whoever did it should feel ashamed for the damage he or she has created to all of us.

This is part of a trend of anonymous briefing and leaks which is detrimental to our unity, our values and our cohesiveness as a group.

We are a big group, with different voices and approaches, but we can only succeed if we are united and manage to work together for the benefit of our residents and the whole borough.

There are processes in place to raise any concerns about policy or any other issues confidentially (the Whips and the Leader are always available) or even publicly at our meetings (the Chair of the Group can always arrange a slot for this) and I strongly encourage all members with any concern to raise them via the correct channels (that are not – to be clear- anonymous attacks on the press, nor general email sent to the whole group).

If any member of the group feels abused or bullied by other members please speak directly with me or Larraine (or Georgia if you feel more comfortable) and immediate action will be taken.

I would also like to take this opportunity for addressing the issue of our behaviour at group meetings – we are going through some very difficult decisions and there have been some heated moments.

It is important that Group meetings are organised in a comfortable way, where everyone would feel able to contribute positively and we all respect each other for the opinions and the inputs that everyone brings, trying to avoid any negative comment that is personal and in any way undermines other people.

Only with an honest and open dialogue amongst us we can achieve to maintain our unity and our strength.

It is very annoying to be forced to send this kind of email again and again, but it is not acceptable that members of this group act in such a disrespectful way!