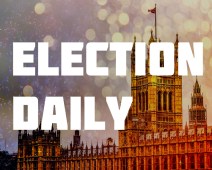 ONE SLEEP TO GO

JOHNNY Luk, the Conservative candidate in Hampstead and Kilburn, declared the arrival of Health Secretary Matt Hancock as a sign that his campaign was ‘closing in’ on victory. “Polls are tightening – Tulip is nowhere to be seen,” he said confidently on this election eve.

At the start of the election we told the parties that we would try to be at as many of these events as possible – the coverage then reflects the effort put in. Only on this final day did we get an invite to a ‘big hitter’ appearance from the Tories. The contrast with 2010 when Chris Philp had the party’s most recognisable faces queuing up for campaign visits is stark.

Mr Hancock praised Mr Luk as the ‘future’ of the party, which perhaps hints at what is likely to happen after we’ve all packed up from the election: the candidate will be praised for the enthusiasm he brought to this show and then hope for an easier constituency next time as a reward… if he does not ‘close in’ on victory, that is.

The greater curiosity around Mr Hancock’s appearance, however, was his choice of hospital for his last day of campaigning: the Royal Free, which is currently £240 million in debt and was the subject of an audit intervention and an order to fill nursing posts.

He declared that 900 nurses and 600 more doctors had been appointed since Labour lost power in 2010; when we asked the hospital to confirm these numbers – the diligent thing to do when politicians throw out such stats on the election trail – it said that actually only 252 extra nurses and 251 doctors had been brought in.

Mr Hancock said he was tired of everybody being so ‘negative’ when Tom Foot, the CNJ reporter, asked him whether he was sure of the numbers.

What he was sure about, however, was his delight at appearing in a ‘Johnny Luk video’…

IT’S all smiles at a Lib Dem reunion as Ed Fordham, the parliamentary candidate in Hampstead and Kilburn in 2010, comes down from Chesterfield to help current contender Matt Sanders. Nice Christmas tree, but who’s house is this? The raunchy red and black poster leads to the 1970s film Une Femme Aux Abois.

AND NOW THEY MENTION THE FAMOUS AUNT

ALSO on the very last day of campaigning, the story of Tulip Siddiq’s links to Bangladesh and the rule of her aunt, Sheikh Hasina, had some shares online. It was a little surprising, I thought, that none of the other candidates brought this up earlier on or at a hustings (especially when Ms Siddiq complained about Boris Johnson’s privilege last week). Instead, they have waited for Channel 4 to do the running by revisiting old ground before commenting.

Now Johnny Luk, as if none of this was known previously and the Putin photo has suddenly been discovered, publishes another one of his video asking people to watch the Channel 4 report and declares that there are questions to be answered. But we are only hours away from voting, it’s so late in the day that maybe the first chance that he can get to discuss it with Ms Siddiq will be at the count. Lib Dem Matt Sanders hasn’t, as far as I can see, made an issue of the Channel 4 report.

OK, so it wasn’t every single day but the ‘Election Daily’ series was a lot of posts given we have a print newspaper and website to do as well. Thanks for reading the blog over these weeks; I hope because of it you feel a little bit more informed about what former councillors are doing in remote constituencies you are not interested in and the fractionally changing bookmaker odds.

I’ve had this site for ten years now, a supplement to the day job – some silly posts, some serious. Sometimes I have to put it on the backburner because of the different roles I have at the CNJ now, but when I come back to it, the response has often been warm and encouraging, even from people who have been teased or not always appreciated the content. I have to thank all of you who do keep reading because the traffic suggests it is still worthwhile.

What’s sad, however, is for the first time I’ve had to turn off the comments, losing some fun additions from people who know about Camden’s politics. I liked the constructive criticism and the debate that those threads had. The decision to close the comments has simply been because the number of attempts to post things that are sweary, libellous, sometimes racist or misogynistic or just plain mean. I’m just amazed at the ton of shit clogged up in the comment filters when I look under the bonnet, and it comes from all sides… actual grown up people from all sides.

It makes you wonder what people with bigger profiles in the media and politics get.

Anyway, thanks again, and look out for a few tweets over election day and night, some thoughts here afterwards and the tradition of the CNJ results print special on Friday morning.

Now get out and vote…