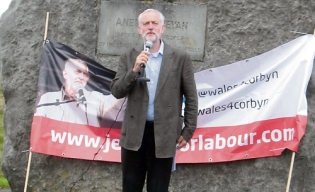 THERE was the briefest of a whisper that Jeremy Corbyn was actually ready to join Frank Dobson and Glenda Jackson in stepping down from Parliament just before the general election in May. It was quickly put down to the mischief of a jealous rival, for Corbyn, as we have now seen, is clearly not ready for a quieter life just yet.

Sitting on one of Labour’s safest seats, his retirement would of course have led to a queue around the block for those interested in standing for the party in Islington North. And here’s a point where Corbyn’s run for the leadership could yet lead to a spot of disappointment among the more vulture-like members of north London’s Labour fraternities.

With the MP set to be 70 at the next election, the scalpers were naturally wondering whether Corbyn would think about finally relinquishing the prized seat in 2020. But if he became leader – and survived the inevitable internal plots and schemes against his leadership for long enough – there will be no option for retirement at the next general election. It has been noted more than once in these past few weeks that those looking, wondering, and hoping might have to stand down any thoughts of being the next MP for Islington North up to ten years if Corbyn’s surprise surge wins through next month.