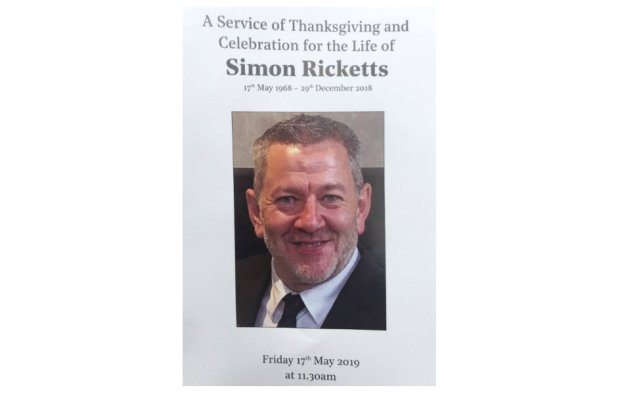 JOURNALISM is a sharp-elbowed industry, full of ego and populated in no small share by people who may well have forgotten that they too were once probably writing nibs on a work experience placement. Sometimes there are people who care more that they have a byline, preferably one with a picture, than what appears below their name. Not always, but it can be self-serving and cliquey. You knew all that already, though.

I’d offer the name of the Guardian’s Simon Ricketts, who died at 50 in December, as wholly antithetic to all of the above. He seemed like a supportive friend to anybody who wanted to use this job for a positive purpose: sharing reliable information people needed, campaigning for better and all the usual ideals about providing a voice for the put-upon.

He showed it could done without the ridicule or meanness which infects a lot of our press and communication today. His wise humour instead could tickle a sore point but without making it hurt, unless it ought to.

It seemed appropriate somehow that on the one day each year that the regional press gets together to celebrate its achievements for its annual awards ceremony, yesterday also saw a beautiful tribute to his life at St Bride’s, the journalist’s church in Fleet Street. It would have been his 51st birthday.

Having come through local papers, including the Watford Observer, he was so encouraging to those that followed in his footsteps and could see the value of our cog, however low down the journalism food chain people may believe we sit. We are not all covering the stories you may have seen in After Life, we are not just collectors of angry people in local newspapers.

My own IRL meetings with Simon may have been brief, but we shared jokes on Twitter, he introduced me to others and, with no ulterior motive beyond being supportive, he sent me encouraging DMs about the CNJ and what we were trying to achieve. And the beauty was he was doing this not just for me, but to hundreds, maybe thousands, of new online acquaintances during the early advent of social media; and clearly doing so without checking the follower count to see whether a response should be deemed worthwhile.

Now if this was a newspaper article, it would try and keep you interested by telling you of the famous faces and well known journalists and writers who were sat in the church yesterday – ooh, so and so was there, and him, and her – but that would completely escape why people were partly celebrating this man’s life beyond the echo of Sunshine On Leith and A Day In The Life sung so achingly by the stunning St Bride’s choir.

It is commonplace now to say that Twitter is not what it used to be, that it is a kingdom of trolls, a fountain of vile abuse. It also can be full of vacuous hot takes, a platform for politicians tweeting what they’ve just done seconds after doing it (almost as if it wasn’t ‘great to speak to xx’, just great to tweet that they had), and the engine for flashzone pile ons that do not always scale with the gravity of the original offence.

I suspect one of the reasons that ‘CheersSimon’ was trending last night was not just that he was a ‘top bloke’, although he clearly was, but also because people yearn for what Twitter was in earlier drafts, when somebody like Simon showed how you could join up the dots and build a network – an army if you will – of online friends sharing the best of what they saw, rather than the worst.

Looking at it now can be going back to your old street and seeing an old favourite pub, a place where you made bonds and shared stories, has been trashed. Taken over by a careless gang.

And yet people have made friendships – and found their life partners – a free-to-all meeting point which was not always weighed down by expectation or conceit.

I remember feeling a hard to define shiver when JC Andrews passed away in 2012; a photographer and fashion enthusiast living in a completely different sphere to me in London – he would have recoiled at my shabby suit, I wrote at the time – but somebody who I, and hundreds of others, had a drifting friendly acquaintance with on Twitter.

A friend I never met, the connection nevertheless was warm and reassuring. All of these links are a triumph of simply ‘being nice’, something journalism is often short on, and certainly Twitter is in its current incarnation. If I wasn’t a reporter, I think I’d happily be among those who have drifted away from it.

Simon was described as a Twitter folk hero in a fitting piece in the Guardian this week, which captured his kindness perfectly, as all of us prepared to bang him out one last time in our different ways.

“You should never dismiss, never ignore, never belittle, the tiny connections we make in our daily lives,” Simon had said in one of his blog entries read to the service yesterday.

“Like tiny filaments of fibre optic, alone, they don’t seem important. But together they provide a brilliant light.”